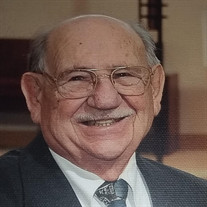 Joseph was born April 9, 1924 in Benevento, Italy to Vincenzo and Maria (Nardone) Carpentieri. He came to the Unites States when he was 2 with his mother Maria, brother Patrick (4), and sister Rose (6-months). Joe served in the US Navy during WWII. He attained the rank of Chief Petty Officer for 29 years. After retiring from the Naval Reserves, he began civilian employment with the Naval Air Rework Facility in Jacksonville and worked there approximately 20 years. Joe is proceeded in death by his son Joseph, Jr. (2017), brothers Patrick, Angelo (Gloria), sisters Rose, Ann (George), and Theresa (Frank). Survived by brother Ralph (Catherine-deceased) and many nieces and nephews. In 1974, Joe married Beatrice (Bea) Andrew. They lived in Ponte Vedra for 15 years and then moved to Sevilla in 1989 when they retired. Joe and Bea are longtime members of St. Paul's Catholic Church of Jacksonville Beach, FL. Joe and Bea traveled to Mexico many times, Panama Canal, Bermuda, Spain, Ireland among many other places. Joe had three children. Joseph Jr (Marlene), grandchildren Amy Carpentieri of Boca Raton, FL and Craig (Amy) Carpentieri of Cooper City, FL. Great grandchildren Jamilla, Safa, Rina. Nanette Krestel of Oro Valley, AZ, grandchildren John Joseph, Jacqueline Anne Krestel, great grand children Kalleigh, Tyler, Kaitlin, Kasidy, Lexi, and Ryan),. Michael Carpentieri (Rhea Williams) of St. Joseph, MO. Grand children Michelle (Carlton Teff), Nicole Carpentieri, and Kira Williams. A special thanks and love to brother Walter (Clara) Andrew of the Beaches who have always been by Joe and Bea's sides through the years. Many thanks also to Mary Louise (Joe-deceased) Andrew of the Beaches for all her help. Many special thanks to niece and nephew Carolyn Fridley (Bill) and Daniel Althoff. Great nephews and niece, Christian, James (Sara), Maria Buttner for all their love and support especially their children great-great nieces and nephew Ryan, Hailey, Baelin who brought Joe so much enjoyment. He is also survived by the Carpentieri and Andrew Family nieces, nephews, great and great-great nieces and nephews of New York and Florida. Family of choice Steve and Dori Ferrel. Thank you to Community Hospice and Clyde Larsen Nursing Home for Joe's love and great care. Donations can be made to a charity of your choice. Memorial services will be held at a later date.

Joseph was born April 9, 1924 in Benevento, Italy to Vincenzo and Maria (Nardone) Carpentieri. He came to the Unites States when he was 2 with his mother Maria, brother Patrick (4), and sister Rose (6-months). Joe served in the US Navy during... View Obituary & Service Information

The family of Joseph Carpentieri created this Life Tributes page to make it easy to share your memories.

Send flowers to the Carpentieri family.