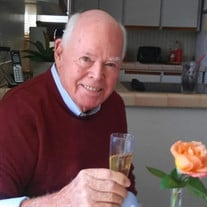 Joseph Robert McNelis 92 years. It is with great sadness we announce the peaceful passing of Bob McNelis on November 1, 2020, in Ponce Therapy Care, St. Augustine. Born on March 12, 1928, in Camden NJ, to the late Patrick & Margaret McNelis (O'Donnell). Bob & his wife Dot, became residents of St. Augustine in 1985. Predeceased by his beloved wife of 58 years, Dorothy P. McNelis, his daughter Constance McNelis, his parents, 7 sisters, and 4 brothers. Survived by his loving children: Cheryl DeMesquita (William), Cynthia Woodcock (Jonathan), Timothy McNelis (Kathryn), his 4 Grandchildren: Sean, Steven, Kelly H, Kelly F, and 7 Great Grandchildren, which were his pride & joy: Jessica, Alesandra, Corinne, Brian, Patrick, Emma, & Charlotte, as well as many nieces and nephews. Bob proudly served his country in the Navy during WWII. Although he rooted for the Jacksonville Jags, he loved cheering the most for his lifelong favorite, the Fighting Irish of Notre Dame. Outgoing & fun-loving Bob enjoyed all kinds of music and dancing to the sounds of Big Bands and Frank Sinatra. He & his late wife enjoyed cruising & traveling. Vacationing in Acapulco was one of their special favorites. Additionally, Bob was very active in his community and even served as President of the HOA for Sandpiper Village for many years. He was also a patron of the Shriner's Hospital for Children, and never missed their "Great Chowder Debate" for over 20 years. He was always ready to enjoy a beer or 2 with family and friends. Bob is deeply missed by many. Per his wishes, cremation rites were performed.

The family of Joseph Robert McNelis created this Life Tributes page to make it easy to share your memories.

It is with great sadness we...

Send flowers to the McNelis family.