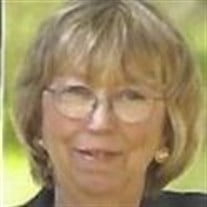 Karen P. Karjala was born in Clearfield, PA, on March 20, 1944, to Russell O. and Helen Claire (Mulhollan) Mullen. She was their third child, following two brothers, Raymond (Owen) and Thomas (Tuck). She graduated from Clearfield High School in 1962, went to Penn State for 2 years, earning an associate degree. Attracted by life in Washington, D.C., she followed her brother Tom there and worked as a rate agent for Pan Am. She loved her job and her clients. She later became a real estate agent/broker and worked for many years in the Reston area of Northern Virginia. She married Louis Pugnetti; together they had a son and a daughter. Years later, they divorced. She met Lawrence Karjala while in Northern Virginia in 1996, and they were married on the island of Maui in Hawaii on January 23, 2001. They moved to Saint Augustine, Florida, in 2003, where Karen worked as a real estate agent for several years. She ultimately purchased a Re/Max franchise in historic downtown Saint Augustine. She loved her agents and her clients. Karen enjoyed travel, and she and Larry went to numerous points on the globe, including Antarctica, the Galapagos, Machu Picchu, Europe, including Ireland, France, Italy, Germany, England, Scotland, Saint Petersburg, Stockholm, and many others. She was active in the Marsh Creek Women's Association as well as the Saint Augustine Real Estate Board. Karen died following metastization of breast cancer on October 4, 2019. She was preceded in death by her brother, Tom. She is survived by her husband Lawrence, her son, David Pugnetti, her daughter, Dana (Pugnetti) Woram, her son-in-law Stephen Woram, Larry's sons Eric Karjala, Kevin Karjala and his wife Peggy Murphy, her brother Raymond and his wife Rebecca (Becky Swisher), sister-in-law Mary (DiSalvo) Mullen, six grandchildren, one great-grandchild, numerous nieces and nephews, and many first cousins. She was a wonderful person and giving; she loved her family dearly. She was a fighter; she fought her cancer for a long time and bravely.

The family of Karen P. Karjala created this Life Tributes page to make it easy to share your memories.

Send flowers to the Karjala family.