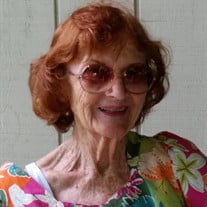 Lillian Elizabeth Daly Geiszler February 5, 1930-January 3, 2022 Known as Lil Geiszler, GG, Mom, Mamasan, Aunt Lil. Born in Southern California, the youngest of three sisters, Lillian studied music and violin. She played in various string ensembles and won a scholarship to Pepperdine University. Locally Lil played first violin with the St. Augustine Community Orchestra for many years. She met the love of her life, John Joseph Geiszler, when he whistled at her at the pencil sharpener in 7th grade. The two were married 56 years when John passed in 2004. They had two children, Anne Marie Banas and Martin Geiszler, who passed in 1993. After John retired the two traveled the continent for 15 years (wearing out 3 motorhomes!). They loved the backroads, traveling from southern California to Alaska, Newfoundland to Southern Mexico and across the US many times. Lil played violin with numerous community groups and orchestras, including the Orange Coast College Orchestra and the Tucson Community Orchestra. Lil enjoyed playing with almost anyone in any style, whether classical, country “fiddlin’” or jazz. The couple eventually settled in St. Augustine in 1998 to be closer to their daughter, Anne. Lil and John loved to hold hands exploring together and were magic on the dance floor! Lil enjoyed making 3 generation trips with her daughter Anne, Emerson, and granddaughter Emily as well as a cross country trip for the wedding of her grandson Max. Lil loved playing family games, and was a formidable competitor at Scrabble and Mexican Train dominoes! She is survived by her daughter Anne and husband Emerson, granddaughter Cypress and husband Eric, grandson Max Geiszler and wife Beverly, and “bonus” granddaughters Emily Brantley Leplon and husband Alan, Julia Brantley Cecil and husband Jevon, Angel Brantley Cummings, and multiple great-grandchildren. Also her niece Chris Bowman, nephew Randy Reddick and their families, and Colleen Dingman, who gave Lil such personal care and friendship. Her family helped celebrate her 90th birthday at her favorite Mayan restaurant, Playa Chac-Mool where she was serenaded befitting a queen. A memorial is being planned there on Saturday, February 5, 2022, on what would have been her 92nd birthday. www.PlayaChacMoolMex.com 105 D St, St. Augustine, FL 32080 (904) 471-1131 Lillian’s bright spirit will live on in our hearts forever. In lieu of flowers the family is asking that donations be made in memory of Lil to the St. Augustine Community Orchestra. https://www.staugustineorchestra.com/support-sao or https://tinyurl.com/SACO-Lil

The family of Lillian Elizabeth Geiszler created this Life Tributes page to make it easy to share your memories.

Send flowers to the Geiszler family.