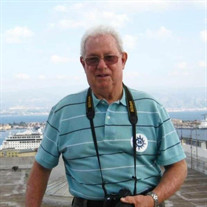 MARC GLADSTONE The patriarch of the Gladstone tribe, Marc Gladstone, passed peacefully on October 29 at The Bailey Community Hospice Center due to complications from congestive heart failure. Marc was born in Hartford, CT on Nov. 20, 1942 to Arlene and Moe Gladstone. He lived with his parents, sister Lonnie, and brothers Stuart and Burton and graduated from Weaver High School in 1960. He attended the Univ. of CT, and later graduated from the Hartford State Technical Institute, where he studied structural engineering. He earned his PE license and became employed by Burton and Van Houten Engineers in West Hartford for many years. In 1963 he and his high school sweetheart, Carol, married. They moved to Simsbury CT where they raised their three daughters, Debbie, Lisa, and Amy. Marc was an avid radio control airplane builder and joined the local enthusiasts club. When his first plane was launched, it flew off, and disappeared. Off he went to find it. He returned with a pile of parts and a big grin on his face because it had actually flown. He later moved on to bigger planes and took flying lessons. He earned his pilot's license and enjoyed flying for several years. Marc was on the board of the Simsbury Theatre Guild for many years. He also worked as stage manager and appeared in the chorus of several musicals with Carol. In 1991 the family moved to St. Augustine, FL where Marc opened his own engineering practice before going to work for the Haskell Company in Jacksonville. As the family grew and grew, the house was filled with the laughter of children and became louder and livelier. Finally, coined the expression “you go now” which was the key for parents to pick up their children, kiss him goodbye, and head home. Marc loved the Jaguars and was a season ticket holder for many years. Later the family found it more tolerable to watch the games on TV. Marc also loved gadgets, computers and instruction manuals. Packages arrived weekly from Fed Ex, which always made him happy. Marc and Carol helped to found Temple Bet Yam, a Reform congregation in St Augustine, where “TBY” members became extended family. He. was on the board and sang in the choir where his lent his beautiful tenor voice from the back row. Music was close to Marc’s heart, and he loved all types. He particularly loved to listen to grandson Christian play around town, to son-in-law Robert’s bands, and to the kids and grandchildren in their many performances. He helped to form Friends of the St. Augustine Amphitheater where he served as treasurer for ten years and was instrumental in their fundraising efforts to support local arts endeavors. It is also where he found yet another extended family. Marc was an engineer through and through. He was known to re-pack suitcases and car trunks in preparation for travel, to re-load the dishwasher, and had a very particular way of making a bed. But he was also quietly mischievous with a great sense of humor and nothing could set him off on a giggle fit more than “Puttin On the Ritz” from “Young Frankenstein”. The most important thing to him was his family, and in his final days he was blessed to be surrounded by those he loved. Marc leaves behind his wife Carol of 57 years, daughter and son-in-law Debbie and Brian Lombardo of Hartford, CT and their children Jessie, Matthieu, Alissa and Gabby Brousseau, and Nic, Matthew and Evan Lombardo. Daughter and son-in-law Lisa and Robert Black, and their children, Leah Black and Alex and Zach Black. Daughter and son-in-law Amy and Chris Powers and children, Isabella, Christian and Zoe Powers. A celebration of life via Zoom is being planned. Donations in memory of Marc Gladstone can be made to Temple Bet Yam or The American Heart Association.

MARC GLADSTONE The patriarch of the Gladstone tribe, Marc Gladstone, passed peacefully on October 29 at The Bailey Community Hospice Center due to complications from congestive heart failure. Marc was born in Hartford, CT on Nov. 20, 1942 to... View Obituary & Service Information

The family of Marc Gladstone created this Life Tributes page to make it easy to share your memories.

The patriarch of the Gladstone tribe, Marc Gladstone,...

Send flowers to the Gladstone family.