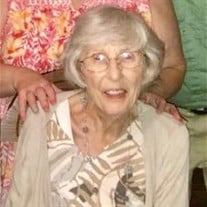 Marcena Way Kenney slipped away in her sleep, ensconced in love on Sunday, March 17, 2019 in St. Augustine, FL at the age of 89. Born on November 3, 1929 in Albany, GA to Helen (Woodruff) and Jesse Way, Marcena is survived by husband, Howard P. Kenney of St. Augustine; brother, Jesse L. Way and wife Shirley of Albany, GA; sister, Mary Louise Jacobs and husband Bud Chappell of New Smyrna Beach, FL; son, Howard J. Kenney and wife Ann of West Union, SC; daughter-in-law, Tami Kenney, of Virginia Beach, VA; daughter, Cheryl Kenney (Cichy) and husband, Fran Cichy of St. Augustine, FL; daughter, Mary Helen Davis and husband Bill Davis of Flower Mound, TX; daughter, Faye Kenney of St. Augustine, FL, grandchildren, Jason Myers (Allison), Kris Kenney (Tina), Kristen Kenney, Kelly Kenney, Patrick Kenney, Emily Davis, Kiki Davis, great-grandchildren Kalyn, Kamren, and Robinson. She is preceded in death by her parents Helen and Jesse Way, and son Robert L. Kenney. Marcena graduated from Andrew College in 1948 and went to work for Coats and Clark in Albany, GA and later as a civil service secretary for the Air Force. It was in this position she boldly took the opportunity to move to Japan to work. She was an adventuresome trailblazer with a wicked sense of humor and joie de vivre which she brought to all occasions and passed on to her children and grandchildren. She married Captain Howard Kenney, a father of three, in 1960. Their journey together was filled with 59 years of love and laughter. The quintessential Southern lady, Marcena was an avid entertainer with a flair for hospitality and for making everyone feel welcome. Moving frequently as an Air Force wife, she was delighted to set down roots in Hagerstown, MD where she developed many life-long friendships and became a leader of the Presbyterian Women at St. Andrew Presbyterian Church. Retiring to St. Augustine, FL in 1992, Marcena and Howard enjoyed 27 glorious years in the Oldest City. She again became active in Presbyterian Women at Memorial Presbyterian Church, where she recently received a Lifetime Achievement award. Next to traveling and relaxing with Howard, Marcena’s favorite thing to do was to spend time with her family. Her children, grandchildren and great grandchildren were her heart and soul. She took every opportunity to be with them whenever and wherever that was possible. Marcena will be missed dearly by all who knew her and will forever be a role model and mentor to her family… Whatever. A celebration of life service is scheduled for Saturday, March 23, 2019 at 11:00am at Memorial Presbyterian Church in St. Augustine, FL, with a reception to follow in the fellowship hall. Craig Funeral Home, Crematory and Memorial Park (www.craigfuneralhome.com) is in charge of arrangements.

Marcena Way Kenney slipped away in her sleep, ensconced in love on Sunday, March 17, 2019 in St. Augustine, FL at the age of 89. Born on November 3, 1929 in Albany, GA to Helen (Woodruff) and Jesse Way, Marcena is survived by husband, Howard... View Obituary & Service Information

The family of Marcena Way Kenney created this Life Tributes page to make it easy to share your memories.

Marcena Way Kenney slipped away in her sleep, ensconced in love...

Send flowers to the Kenney family.