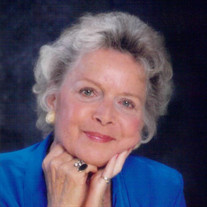 Marian Irene Charlesworth Miller Buckland, age 95, passed away peacefully on Wednesday, April 13, 2022 at the Bailey Family Center for Caring in St. Augustine with her daughter Trudy by her side. Long time listeners of Flagler College radio station WFCF 88.5FM will remember Marian as the host of the weekly radio show “Marian’s Jazz Greats”, where she pronounced her name “Mari-ann”, and which earned her the long-standing nickname of “Miss Deejay”. Marian was born on July 3, 1926 in Woodbury, New Jersey to Helen Irene (Haines) and John Wade Charlesworth. She was the youngest of four children, with three older brothers: John Wade Charlesworth Jr., Leslie Lawrence Charlesworth, and William Haines Charlesworth. As a young child during the depression, Marian dealt with the hardships of her family having to separate and live with extended relatives while her father searched for work. As a child she loved to sing, and at eight years of age she auditioned for, and got a part on, the Kiddies’ Hour of WSNJ radio station, where she sang every other Saturday afternoon on a show held and broadcast from a movie theater stage. The show was sponsored by the town bakery, and Marian was proud because the bakery gave the performers cake to take home, something her family could not have otherwise afforded during the depression. Marian graduated from Bridgeton High School, in Bridgeton, New Jersey, and later attended the Hartford Conservatory for Music in Hartford, CT where she trained to sing opera, including studying Italian at the Vidil-Rock Modern School of Languages. She went on to perform with, and was a proud founding member of, the Canton Benefit Productions, a non-profit community theatre group which turned all its proceeds over to local schools. When she was 14 years old, on the night of her grandfather’s funeral viewing, Marian met a handsome young man, David Clifton “Kip” Miller, who offered her a ride in his old car. She had to decline his offer, but she continued to see him around school, and eventually did take him up on his offer of taking a ride in his old model Ford where he brought her some “Tasty Cakes” as a treat. They were married in November 1943. Their newlywed years were difficult though, as Kip was then a Staff Sergeant in the Air Force and his plane was shot down over Belgium in May of 1944, just 6 months into their marriage. He was held as a POW in Germany until April 1945 before returning home to married life. Their three beloved children were born in 1946, 1948, and 1955. As a young woman Marian first worked as a secretary to the sales manager at Ferracute Machine Company in Bridgeton, New Jersey, and later worked as a legal secretary at the firm of Robinson, Robinson and Cole in Hartford, CT. She also worked in careers as an Educational Administrative Assistant, and as a realtor. In her later life, Marian became the host of a jazz radio show on Flagler College station WFCF, where for almost 20 years she hosted a weekly show of classic and standard jazz songs. After retiring from the radio show, Marian still lived a very active life, which included vacations to the United Kingdom, Iceland, Hawaii, and a cruise to Alaska, regular trips to visit her children and grandchildren, dining out, watching nature documentaries and her daily soap operas, listening to music, and taking care of her beloved small dogs, which she always owned one of. Marian was a woman of strong religious faith, having been raised in the Episcopal Church, but she also loved attending services for various other Christian denominations, and received solace and comfort from the services, songs, and rituals. Her one fundamental truth that she held on to her entire life was that she knew there was a God, as he has answered so many of her prayers. Marian is survived by her three children, David C. “Kip” Miller Jr. (Pat) of Englewood, FL, Jeffrey W. Miller (Sheila) of Rochester, WA, and Trudy A. Miller of St. Augustine, FL, as well as 8 grandchildren, and numerous great-grand-children and great-great-grandchildren, all to whom she was affectionately known as “Buckby”. Her children, grand-children and great-grandchildren will always remember her sweet voice singing the song “Birdies in the nest” to them, and telling them that she loves them “a bushel and a peck”. Marian is also missed by her most recent dog, Daisy May, a Shih Tzu, who now lives with Marian’s daughter Trudy. Marian was preceded in death by her parents, her three brothers, her two husbands David Clifton “Kip” Miller Sr. and Charlie E. Buckland, and her great grandson David Clifton Miller IV (K-4). A private memorial service will be held by the family at a later date with internment of Marian’s ashes at the Miller family plot at Chestnut Grove Cemetery in Elmer, New Jersey

Marian Irene Charlesworth Miller Buckland, age 95, passed away peacefully on Wednesday, April 13, 2022 at the Bailey Family Center for Caring in St. Augustine with her daughter Trudy by her side. Long time listeners of Flagler College radio... View Obituary & Service Information

The family of Marian Irene Charlesworth Miller Buckland created this Life Tributes page to make it easy to share your memories.

Send flowers to the Buckland family.