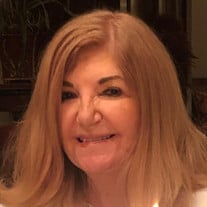 Marilyn Rose Frankel, 79, of St. Augustine, passed away peacefully at Baptist Medical Center Jacksonville on June 25. At her side were her loving husband Harvey, son Gregory, daughter Noelle, and sister Cynthia. Marilyn was diagnosed in March with aggressive stage 4 metastatic melanoma in her lungs. Mercifully, our Lord ended her suffering after three months. Marilyn was the second of four children born to Joseph Earl and Rose Turner in Miami. The first, her brother Joe Jr, died in 1980, leaving her sisters Cynthia Sharpe and Cecilia Gulas. She was a beloved daughter, sister, wife, mother, grandmother, great grandmother, mother-in-law, aunt, cousin, and a true friend. Music was Marilyn’s earliest love. She sang as a child and a teenager. Marilyn performed with Paul Anka in Arthur Godfrey’s Miami Beach talent show. She was excited to see Elvis Presley in concert, and was president of his fan club. An early marriage gave Marilyn her son Gregory Taylor, who became an accomplished classical concert pianist, teacher, and music director. Next came her beautiful daughter, Noelle Christine Hirschfeld, whose love and caring of others led her to become a physical therapist. While raising young Greg and Noelle as a single parent, Marilyn worked in a bank where she met Harvey Frankel. He would come in almost daily to wait in her line only. But one day she left that job. Harvey didn’t know how to find her. Eventually Marilyn reappeared; Harvey jumped at the opportunity and as he says, “We were together ever since.” They were married May 11, 1975. In that moment, Marilyn had two more young children: Glenn and Elona (Lonnie). Glenn has made a career in the US Postal Service, and Lonnie is currently enjoying life at home in Wasilla. Besides banking, Marilyn worked for Tasco (binocular manufacturer), and then for an environmental company in human resources. Harvey was doing environmental work at that time. In the winter of 1990 they visited Anchorage, Alaska, on vacation (Yes,winter!). Although this was not their plan, they were both hired on the spot for the same type of work they were currently doing in Miami (with an attractive pay differential). Quickly they returned to Miami, packed up and drove to Anchorage to arrive in time for Harvey’s training program to begin. Marilyn was initially hired to create and administer a drug testing program for the Alyeska Pipeline employment agency in Anchorage. Then Wasilla Mayor Sarah Palin hired Marilyn to start a similar program and form the human resources department for the city. Harvey began working throughout Alaska in environmental cleanup. Eventually he and some partners formed their own company. They had so many adventures! Summers brought long days, beautiful flower and vegetable gardens, boating, and amazing hikes. During the winters they enjoyed skiing, snowmobiling, bonfires, and the Northern Lights. Christmas was always special, and their August birthdays provided an excuse for a big celebration on the grounds of their 7-acre homestead. During those years in Alaska and through 2020, Marilyn and Harvey spent the month of February in Cabo San Lucas, enjoying the company of dear friends from all across the country who shared the same timeshare period at Playa Grande Resort Los Cabos. Those friends will miss her terribly. After 19 years, they retired and settled in St. Augustine in 2009, near Marilyn’s sister Cynthia and her husband Wayne Sharpe. While in Alaska, Glenn and Lonnie lived nearby. But Greg and Noelle had remained in Miami; finally, they were only about a five-hour drive away! And oh! How she loved her grandchildren! While in Alaska, Marilyn sewed beautiful matching dresses for young Kaytlin and Micaela, and began a tradition of making personalized baby quilts. She made one for Sarah Palin’s daughter, Piper, and for many other friends and relatives over the years. She also loved to cook. Making soup became her specialty – big pots of soup, which she lovingly shared. Marilyn and Harvey both volunteered at Flagler Hospital in St. Augustine for over 10 years, until Covid-19. She helped the technicians in the monitor bank, then the nurses in the emergency department. Harvey drove the courtesy cart. They both loved their work there. No one didn’t like Marilyn. Not many people can claim that. But it’s true. Her heart was big enough to share with so many in her life. She was sweet and kind, colorful and funny, generous, affectionate, patient, faithful, loyal, and beautiful through and through. She was also a devoted Catholic. Her faith brought her consolation and hope, and now she is surely resting in the loving arms of her heavenly Father. Marilyn was preceded in death by her parents, Joseph Earl and Rose Turner, her brother Joseph Earl Turner, Jr, her niece Jeanmarie Turner Gonzalez and her nephew John Peter Turner. She is survived by her husband of 46 years, Harvey Frankel; children Gregory (Laura) Taylor and Noelle (Neal) Hirschfeld of Miami; Glenn (Lisa) Frankel of Vancouver WA; Elona Roberson-Vuk (Tom) of Wasilla AK; sisters Cynthia Turner Sharpe of St. Augustine and Cecilia (Michael) Gulas of Hollywood FL; grandchildren Corey Roberson of Anchorage AK, Kaytlin Roberson of Portland OR, Michaela (Adam) Turner of Mountain Home ID; Brandon, Jessica and Zachary Frankel of Vancouver WA; Jordan Hirschfeld (deceased), James Hirschfeld of Los Angeles CA, Sara Hirschfeld and Tristan Taylor of Miami; six great grandchildren; nephews Jeffrey (Jolene) Turner, Steven (Debra) Gulas, Scott (Amy) Gulas; and Harvey’s godson Greg Strump and wife Susan of St. Augustine. Visitation will be held 5-7 p.m. Friday, July 2, 2021 at Craig Funeral Home. A Funeral Mass will be held 9:00 a.m. Saturday, July 3, 2021 at Corpus Christi Catholic Church. A private interment ceremony will be held at the columbarium of St. Anastasia Catholic Church the following week. Flowers are graciously declined and those wishing may make a contribution in her memory to the American Cancer Society.

Marilyn Rose Frankel, 79, of St. Augustine, passed away peacefully at Baptist Medical Center Jacksonville on June 25. At her side were her loving husband Harvey, son Gregory, daughter Noelle, and sister Cynthia. Marilyn was diagnosed in March... View Obituary & Service Information

The family of Marilyn Rose Frankel created this Life Tributes page to make it easy to share your memories.

Send flowers to the Frankel family.