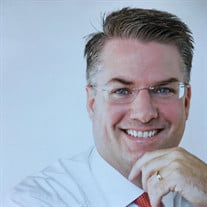 Mark Kenneth Wallace passed away peacefully, surrounded by his family on November 28 at his home in Jacksonville, Florida, after a courageous battle with pancreatic cancer. Mark was born on June 10, 1969 in Saint Lambert, Quebec. He attended Chambly County High School there and went on to earn a bachelor’s degree from Laurentian University in Sudbury, Ontario. Mark returned to the Montreal, Quebec area and married Josée Boudreau in 1994 and they welcomed two children, Kelsey and Matthew. Mark began his professional career at the Canadian National Railway Company’s (CN) headquarters in Montreal, Quebec in 1995 and spent over 15 years there in various roles, ultimately ascending to the position of assistant vice president of Public Affairs. After leaving CN in 2010, Mark and his family moved to the greater Toronto area where he worked as head of Investor Relations for Husky Ignition Molding Systems and later as a client partner at Longview Communications. Mark then joined the Canadian Pacific Railway (CP) in 2012 in Calgary, Alberta where he spent four years serving as vice president of Corporate Affairs and Chief of Staff. In 2017, Mark moved to Jacksonville, Florida to hold a number of senior positions at CSX until ultimately becoming executive vice president of Sales and Marketing before stepping into a strategic support role in 2021 while he underwent cancer treatment. Mark was an active member in the community, spearheading CN’s support for children’s hospitals across Canada by raising millions of dollars through the CN Miracle Match program. He was instrumental in CP’s support of heart health across North America. Mark most recently served on the Board of Directors of Wolfson’s Children's Hospital in Jacksonville, Florida. Mark is survived by his dearly beloved wife of 27 years, Josée Boudreau; his treasured children, Kelsey and Matthew; his mother Dale Morrison; sisters, Kathryn (Bill Toohey), Sharon (Yves Paquette); brother, Peter (Susan Galardo); mother-in-law, Gisèle Lachapelle (Serge Pigeon); brothers-in-law, Marc Boudreau (Nancy Daigneault), Pierre Boudreau; and, many nieces and nephews. His father, Frederick Ross Wallace, preceded him in death. The family will hold a private memorial service to celebrate Mark’s life. Donations can be made in lieu of flowers: In Canada to the Cedars Cancer Foundation for Pancreatic Cancer, https://www.cedars.ca/en/how-to-help/donations and In the U.S. to the MD Anderson Cancer Center through Mark’s memorial page, https://secure3.convio.net/mdacc/site/TR/DIY/General?px=1450114&pg=personal&fr_id=1473 Or to Wolfson Children’s Hospital https://giving.baptistjax.com/give/364230/#!/donation/checkout

Mark Kenneth Wallace passed away peacefully, surrounded by his family on November 28 at his home in Jacksonville, Florida, after a courageous battle with pancreatic cancer. Mark was born on June 10, 1969 in Saint Lambert, Quebec. He attended... View Obituary & Service Information

The family of Mark Kenneth Wallace created this Life Tributes page to make it easy to share your memories.

Mark Kenneth Wallace passed away peacefully, surrounded by his...

Send flowers to the Wallace family.