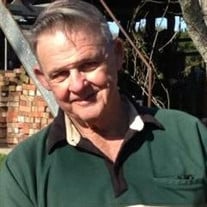 Marvin J. Wilson, 82, passed away peacefully on March 14, 2022. He was born February 15, 1940, and raised in St. Johns County, Florida. Marvin attended Mill Creek Elementary School and graduated from Ketterlinus High School in 1958. After graduating, he began his lifelong career as a Machinist, beginning at Parker & Mick in Jacksonville. In 1959, he met his love Jan and they married April 22, 1963. In 1965, he, with Jan beside him, opened Wilson Machine & Welding Works, Inc., where it still operates today. Marvin served his country as a Reservist in the United States Army. He and Jan enjoyed travelling. They explored the United States and Bahamas extensively. He was an avid hunter. Nothing gave him more joy than being outdoors with his family and friends. Marvin was predeceased by his parents Earl and Eva, and his brother RJ. He is survived by his wife of almost sixty years, Janice, his sons, Kevin (Amber), Todd (Yvette), three grandchildren, Kayla, Bradley and Tiffany, his sister, Terry Johnson, and his sisters-in-law, Juanita Wilson, Camilla (Allan) Roberts and Debbie Jones. Visitation will be at 1:00 PM with a funeral service beginning at 2:00 PM on Tuesday, March 22, 2022, at Craig Funeral Home, 1475 Old Dixie Highway, St. Augustine, FL 32084. Burial at Sampson Cemetery. Flowers gratefully accepted or donation to a charity of your choice in Marvin’s honor.

The family of Marvin J. Wilson created this Life Tributes page to make it easy to share your memories.

Send flowers to the Wilson family.