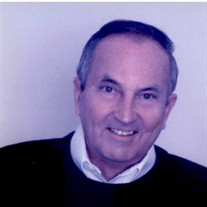 Melvin Joseph Kulhanek, 84, of St. Augustine, Florida, passed away at home on April 2, 2022, after a long battle with cancer. He was born on January 2,1938, in Chicago, Illinois, a son of the late Kenneth and Helen (Czaikowski), and grew up in the Chicago suburb of Westmont. He attended Saint Procopius Academy and Saint Procopius College in Lisle, Illinois. Mel was honorably discharged from both the U.S. Navy and the U.S. Army after serving with the U.S. Navy Reserve and with the U.S. Army in Korea. In 1962, he married Patricia Collins in Westmont, Illinois, and they were blessed with 59 years of marriage. Together they had two sons, Jeffrey and Timothy. He enjoyed completing home renovation projects with his sons and supporting their athletic activities. Mel enjoyed a long career in the consumer credit card industry as he enjoyed working with people and being involved in the technological changes that were constantly being developed. He retired as Vice President, Business Operations for G.E. Consumer Finance after 43 years in the industry. Mel was involved with nonprofit organizations, primarily focused with The National Foundation For Credit Counseling and the United Way. In 1993, he received the Distinguished Service Award from the International Credit Association for his accomplishments particularly related to enhancing credit education and helping people develop and manage personal credit. In dedication to his strong commitment to faith, Mel was a long-time member of the Cathedral Basilica of St. Augustine. He was an active volunteer in a number of the Cathedral’s charitable and spiritual activities including many years as a lector. Mel is survived by his wife Patricia; son Tim and wife Yasue; sister Irene Pasquini and husband Robert; and numerous other relatives and friends. He was preceded in death by his son Jeffrey, brothers Louis and James, and sister Janet Vrba. A Mass of Christian Burial will be held at 9 am on Tuesday, April 26, at the Cathedral Basilica of St. Augustine. Interment will be held at a later date at Queen of Heaven Cemetery in Hillside, Illinois. In lieu of flowers, the family has requested any memorial contributions be made to a charity of your choice.

Melvin Joseph Kulhanek, 84, of St. Augustine, Florida, passed away at home on April 2, 2022, after a long battle with cancer. He was born on January 2,1938, in Chicago, Illinois, a son of the late Kenneth and Helen (Czaikowski), and grew up... View Obituary & Service Information

The family of Melvin Joseph Kulhanek created this Life Tributes page to make it easy to share your memories.

Send flowers to the Kulhanek family.