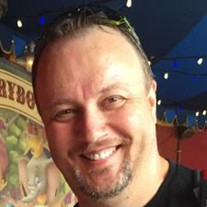 Migdad Selimovic, 45, of St. Augustine, FL, passed away unexpectedly on February 25, 2019. Migdad was born July 26, 1973, in Zvornik, Bosnia and Herzigovina, to the late Midhat Selimovic and Ajsa (Selimovic) Imamovic. He is survived by his wife, Rachel (Free), four children, Paige (11), Dean (8), Lila (5), and Jaeko (3); one brother Nazif Selimovic (Evan), and grandmother Saha Mujanovic. Words can’t describe how this man changed peoples lives once you met him. He was fierce, confident, and loyal. The amount of strength and vitality he lived his life was comparable to none and his passion for technology and education was a driving force in his life. He worked in the Engineering field for over 20 years, and taught at Southern New Hampshire University for 9 years. He was an incredible mentor to anyone who worked with him. And an even better friend. He held three master’s degrees and a PhD (abd). Education was something he believed in, because he was helping to build the foundation of the next generation. His passion and knowledge of soccer was passed down to his children, as the fourth generation of Selimovic soccer players. He was immensely proud of his family; his wife of 20 years and their four children. He believed that the strength of a man was through his family and saw them as the legacy he would leave behind. Migdad will truly be missed by all those who knew him, but our lives are forever changed because of him. “Here’s to the crazy ones, the misfits, the rebels, the troublemakers, the round pegs in the square holes. The ones who see things differently; they’re not fond of rules. You can quote them, disagree with them, glorify or vilify them, but the only thing you can’t do is ignore them because they change things. They push the human race forward, and while some may see them as the crazy ones, we see genius, because the ones who are crazy enough to think that they can change the world, are the ones who do.” –Steve Jobs, Think Different – Apple Advertisement, 1997

Migdad Selimovic, 45, of St. Augustine, FL, passed away unexpectedly on February 25, 2019. Migdad was born July 26, 1973, in Zvornik, Bosnia and Herzigovina, to the late Midhat Selimovic and Ajsa (Selimovic) Imamovic. He is survived by his wife,... View Obituary & Service Information

The family of Migdad Selimovic created this Life Tributes page to make it easy to share your memories.

Send flowers to the Selimovic family.