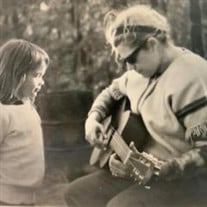 Mildred Caroline Vreeland, lovingly known as Nena, passed away peacefully in St. Augustine, FL, on Friday morning, July 23 rd , in the grateful company of her only daughter Mimi Vreeland and Mimi’s partner Joe Mayernick. Born in Pittsburgh, PA on January 13, 1934, Nena grew into a woman of intelligent grace and devoted her life to social and environmental justice, cultural diversity, and the arts. Her father Richard Ford was a U.S. diplomat, and her mother a classically trained opera singer. As a diplomat’s daughter, she grew up in Canada, Argentina, and Brazil. A sincere interest in other cultures eventually led to a graduate degree in foreign policy from Johns Hopkins University. Over the course of her life, she traveled and resided in over 24 countries and could speak 7 languages. In her young adulthood, she became adept in the visual arts, music, and theater. An accomplished flamenco and jazz guitarist, she studied with the famed Charlie Lee Byrd in the late 1950s and early 1960s. She was hired after graduate school by Herbert Harold Vreeland, an anthropology professor at American University, to write chapters on foreign countries for the U.S. Army. One of the first handbooks she wrote was on Iraq. Many of the books became bestselling publications to American businesses expanding overseas. Herbert “Hal” Vreeland and Nena shared many interests, particularly in each other. Hal recalled the tipping point that led to their courtship and marriage in 1959: a delicate chain of dandelion flowers Nena handcrafted on the campus lawn and left on his desk one day after lunch. He was smitten for life. Their only daughter Mimi was born in 1960, and they moved from D.C. to Bethesda, MD. By the time Mimi graduated from high school in 1978, Nena had a flourishing career as a program analyst for the United States Agency for International Development, where she continued until her retirement shortly after her husband’s death in 1992. In 2002 Nena headed south to St. Augustine to be closer to Mimi and beloved granddaughter Max Caroline Balch. Nena embraced St. Augustine and plunged into volunteer work. She took up painting again as a member of the St. Augustine Art Association and was a regular patron and donor for the Emma Concert Series. Her volunteer work included the Learn-to-Read Program, the Ecumenical Food Pantry, Dining-with-Dignity for the homeless, and other activities affiliated with the Unitarian Universalist Fellowship. A participant in many a civil rights march, Nena was instrumental in the completion of the St. Augustine Foot Soldiers Memorial, donating the first $20,000 toward its construction in 2011. That same year she donated two porcelain statues to St. Augustine’s Lightner Museum that were given to her mother’s family during the Civil War by a confederate general, a gesture of atonement for her mother’s forefathers who owned large plantations in South Carolina and were slave owners. In 2014, Nena contributed $5,000 toward the relocation of the St. Augustine Pilot Club WWII Memorial, as a way to honor the fourteen men in her late husband’s family who served in World War II, all of whom miraculously survived, came home, and led full lives. Nena Vreeland is survived by her granddaughter Max Balch, whose homebirth she witnessed in amazement on a small pecan farm in West St Augustine in 1997. Max was instantly the “apple of her eye,” for whom she has left a large legacy of humanitarianism. Nena is also survived by her daughter Mimi Vreeland; her stepson William Vreeland of Santa Barbara, CA; her brother and sister-in-law Richard and Brydie Ford of Ormond Beach; the Ford’s two children Heather Herd of Taos, NM and Robert Ford of Fayetteville, AR; her sister Natalie Bigelow of Fernandina Beach; her deceased sister Mary Bettle’s children Patty and Cathy Bettle; Mary Bettle’s four grandchildren; and her cousin Mary Barton of Silver Spring, MD. The details of a memorial service for Nena Vreeland will be forthcoming. Please honor her life with random acts of kindness and compassion.

The family of Mildred Caroline Vreeland created this Life Tributes page to make it easy to share your memories.

Send flowers to the Vreeland family.