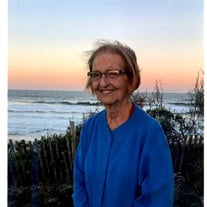 Nancy Lintini Bradshaw, daughter of the late Philomena and Salvadore Lintini of Wallingford, Ct. peacefully died on Wednesday April 14, 2021, surrounded by her family. Nancy was predeceased by her Husband James "Jim" Bradshaw Sr., son James Edward Bradshaw Jr and his wife Constance, Nancy's mother and father, Her Sister, Mary Lintini Cantarella and her Husband Louis, and their son-in-law Scott Becroft, her brother Fred Zullo and his wife Rosailie, her mother and father in-law Mary and CE Bradshaw, her sister-in-law Barbara Bonyai and her husband George, and their son Edward. She leaves behind two daughters: Kathy (Don) Waller, Marie (Anthony) Marciniak, grandchildren: Donald (Heather) Waller, Katie (Christopher) Wilson, and Brian (Anne Stegner} Marciniak. She also leaves seven great-grandchildren: Brooke Marciniak, Zane Wilson, DJ, Gracie, David, Clay and Glory Waller. Nancy grew up in Wallingford, Ct. and attended all Wallingford Public Schools. She took business classes at Lyman Hall High School. She worked in the Personnel Office of R. Wallace and Son during high school and stayed until 1949. From 1949-51, she helped raise funds for the present YMCA. Nancy was secretary to the Vice President and worked in the purchasing department at Defelice Construction from 1951- 1953. While her children were growing up, she worked part-time with the regional manager for Similac. In 1966-1986, she went to work for the Wallingford Board of Education as Secretary to the Food Service Director and then in Accounts Payable and Purchasing in the Business Office. Nancy then was the Secretary to the Business Manager and in Budget Accounting. She was Secretary to the Principal at Cook Hill Elementary School and retired in 1986.  Nancy's Family will receive friends  5 - 7 PM Saturday at Craig Funeral Home. A visitation, Funeral Mass and burial will be held at a later date in Connecticut.  In lieu of flowers, Donations may be sent in Nancy's honor to; The Sister's Of St. Joseph at P.O. Box 3506, St. Augustine, Fl. 32084 or to The Cathedral Basilica of St. Augustine at 35 Treasury St., St. Augustine, Fl. 32084.

The family of Nancy Lintini Bradshaw created this Life Tributes page to make it easy to share your memories.

Nancy Lintini Bradshaw, daughter of the late Philomena and Salvadore...

Send flowers to the Bradshaw family.