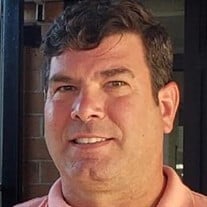 Nicholas Joseph Landry III, 52, died unexpectedly on June 6, 2022 at his home. He was born on April 20, 1970 in St. Augustine, Florida, and had resided here for almost his entire life, with the exception of his later high school years and the time he spent in the military. He served his country in the U.S. Navy aboard the USS Shreveport and got to see many parts of the world and bring back a ton of great stories. His two children meant the world to him. He loved to cook and received culinary arts training at First Coast Technical College. He was a property appraiser for St. Johns County for the past 16 years and loved his job. He was always the life of the party and was known for his larger-than-life smile and infectious laughter. In recent years he took up cornhole and competed in area cornhole tournaments. A Celebration of Life will be held on Sunday, June 26 at the St. Augustine Shrine Club, 250 Brainard Drive, St. Augustine. Services will be held from 11 a.m. to 12 p.m., followed by a Celebration of Life gathering with food, drinks, and cornhole. His many friends are welcome to attend. In lieu of flowers, donations can be made to his children, Lia Landry, age 18; and Lial Landry, age 16. A GoFundMe page will be available, along with donations accepted at the Celebration of Life. He is survived by his children, Lia Landry; Lial Landry; his father, Nicholas Joseph Landry II; his mother, Donna Terrell; two brothers Eric Landry, Ryan Landry; his girlfriend, Marilyn Hunt; his aunt, Amye Venancio; his uncle, Paul A. Landry; his cousin Cousin Joseph Venancio; brother and sister-in-law, Shawn and Renee Unsworth; and his nieces, Grace Landry, Kyler Unsworth, Brielle Unsworth, and Mesa Unsworth. Craig Funeral Home and Crematory is in charge of arrangements

Nicholas Joseph Landry III, 52, died unexpectedly on June 6, 2022 at his home. He was born on April 20, 1970 in St. Augustine, Florida, and had resided here for almost his entire life, with the exception of his later high school years and the... View Obituary & Service Information

The family of Nicholas Joseph Landry III created this Life Tributes page to make it easy to share your memories.

Send flowers to the Landry family.