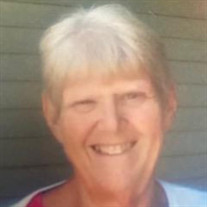 Eastes, Norma Jean August 20, 1948-August 19, 2021 The family of Norma Jean Eastes is saddened to announce her passing on August 19 at the age of 72. She will be lovingly remembered by her sister, Carolyn (Edwin) Roberts, cousin, Pat Davis , sister in-law Rose Eastes; nieces Tanya Roberts, Katina (Mark) Petroff, Stephanie (Dominick) Mazella and JoAnna Eastes; great-nieces Amber (Vince) Konwinski, Ashely (Aaron) Wilson, Andrea Freon, Madison McMillan and Noelle Petroff; as well as numerous relatives and friends. She was preceeded in death by her parents, William and Letha (Shepherd) Eastes, brother, Bill Eastes and sister, Dorothy Eastes. Norma was born in Fort Wayne, Indiana. She was a graduate of Elmhurst High School. She worked at Wells Fargo Bank, in Fort Wayne, where she was in management until moving to St. Augustine, Florida in 2000. There, she worked for Coastal Realty and Property Management from 2004-2013 until she retired, where co-workers became dear friends. Norma, or “Aunt Jean” as her nieces lovingly called her, cared deeply for her family and friends. She believed that this life was all about love. She lived that out in her relationships. Norma enjoyed having dinner with her sister and brother in-law. She loved to paint, have ice cream and meditate. Norma adored being a part of a meditation group, a mahjong group and a trivia group in St. Augustine where she will be greatly missed by her friends. An ashes at sea memorial and celebration of life will be held on October 16 for immediate family, due to the pandemic. The family requests memorials be sent to the St. Augustine, Florida Humane Society’s Spay and Neuter Clinic, in Norma’s honor.

Eastes, Norma Jean August 20, 1948-August 19, 2021 The family of Norma Jean Eastes is saddened to announce her passing on August 19 at the age of 72. She will be lovingly remembered by her sister, Carolyn (Edwin) Roberts, cousin, Pat Davis ,... View Obituary & Service Information

The family of Norma Eastes created this Life Tributes page to make it easy to share your memories.

Send flowers to the Eastes family.