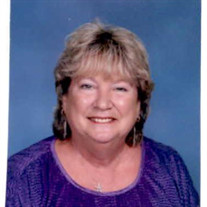 Patricia Jane (Whitehead) Underwood Patricia Jane Whitehead Underwood passed away on March 15, 2021 at the Bailey Family Center for Caring. Pat was born to Tom and Eunice (Monfort) Whitehead in Homestead, Florida. After graduating as valedictorian from Campbell High School in Fairburn, Georgia, she attended Shorter College in Rome, Georgia, where she met her husband of 42 years, Charles Underwood. She went on to receive a Bachelor of Arts degree from USNY - Regents College and was a member of Phi Theta Kappa. Pat became active in the NYS Jayncees, went on to become the State Vice President of Administration and was awarded as US Jaycee Women Congresswoman. She was also honored as an Outstanding Young Woman of America for four years. While living in New York, Pat began working at Shepard Niles Crane & Hoist Company as receptionist, then Sales Secretary, and finally as Customer Service Representative. After moving back to St. Augustine, was happily employed by the St. Johns County School District, first as a substitute teacher and then as a Paraprofessional, and retired after 17 years of service. An avid reader, Pat also enjoyed crossword and jigsaw puzzles, but was happiest outdoors with her plants and flowers. She had a strong faith in God that helped her as she fought a courageous battle with breast cancer. In addition to her parents, she was preceded in death by her husband Charles, sister Marcia Studdard, and twin sister Pamela Sharp. She is survived by her sons, Charles Jr. (Tamara) and Steven, her daughter Christina Jones, grandchildren Charles Ill (Melissa), Jordan (Ryan) Van Alstine, and Madison, her great-grandchildren, Damian and Kira, and her brother, Thomas Whitehead. A Celebration of Life will be planned for family and friends at a later date.

The family of Patricia Jane Underwood created this Life Tributes page to make it easy to share your memories.

Send flowers to the Underwood family.