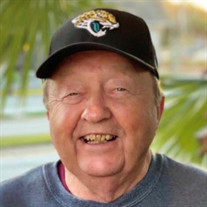 Patrick Norris Rinne died unexpectedly on May 16th 2021, in St. Augustine, Florida. Pat was born April 01, 1942, in Everett, Washington to Edwin A., and Willa E. (Kiffer) Rinne. He spent all of his youth in the Pacific Northwest, and attended Everett High School. After High School, Pat enlisted in the Navy and served four years, from 1959 to 1963. For most of his enlistment, he served on the USS Enterprise (CVN-65) and was part of the commissioning crew and plank owner. After leaving the Navy, Pat married Veronica Quintal. They started a family in Plymouth, MA, having two children, Cheryl and Chuck. They moved back to Washington state for some time before their marriage ended in divorce. Pat later married Judy Eddy helped her raise her two daughters Sheryl and Christy, also ending in divorce. Pat had numerous occupations throughout his life. He went on to work for the Bureau of Reclamation on numerous dams in the Western U.S., where he was an active member of the IBEW union, and retired in 1997. Pat married Prudence (Scott) Deines of Montrose, Colorado in 1989. Pat absorbed a new family as his very own, was a loving Father, Grandfather, and eventually Great Grandfather. Pat filled this role as if he had been there from the very start. Pat and Pru took numerous cross-country motorcycle trips and also by Motorhome. After retirement, they spent summers in Colorado and winters in Florida, ultimately moving to St Augustine, Florida full time in 2017. Pat never met a stranger and made friends with practically everyone he interacted with. He was an avid motorcycle rider and organized countless group rides. Most notably, he was a founding member of the B.C.O.F.M.C. and served as Club President for several years. (Black Canyon Old Farts Motorcycle Club.) At his request, no service will be held. Pat is survived by his wife of 32 years, Pru Rinne (St. Augustine, FL.) and her children, Amey and John Jutten of Palisade Nebraska, Paula and Terry Young of St. Augustine Florida, and Matt and Blythe Deines of Vashon Island Washington, along with 10 grandchildren and 4 great grandchildren. Also survived by his daughter Cheryl Rinne of Crooksville Ohio and son Chuck Rinne, of Plymouth Massachusetts. His step daughters Sheryl Lockhart of Sedro Wooley, WA., and Christy Lindstadt of Santa Rosa CA. His brothers and their spouses, Dan and Mary Rinne, of Marysville WA, Jack and Carol Johnson of Everett, WA., Mike Rinne of Yucca Valley, California, his Sister Joann and Robert Mason also of Marysville, WA.

Patrick Norris Rinne died unexpectedly on May 16th 2021, in St. Augustine, Florida. Pat was born April 01, 1942, in Everett, Washington to Edwin A., and Willa E. (Kiffer) Rinne. He spent all of his youth in the Pacific Northwest, and attended... View Obituary & Service Information

The family of Patrick Rinne created this Life Tributes page to make it easy to share your memories.

Send flowers to the Rinne family.