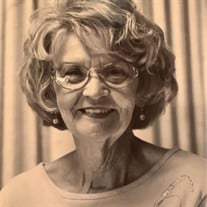 Patsy Daniel Butler, 82, passed away peacefully at home in St. Augustine, FL, on June 4, 2021, surrounded by her loved ones and under the compassionate care of Community Hospice. The only child of Bill and Elizabeth Daniel, Patsy was born Aug. 6, 1938, in Wadsworth, Ala., but grew up in nearby Wetumpka, Ala. From a young age she was drawn to both drama and dance, and honed these skills from elementary school throughout her college days. A graduate in elementary education from THE University of Alabama, class of ‘60, she carried her love for her alma mater and its football team throughout her life, not only as a die-hard Bama fan but as a SEC football super fan. She was a teacher for more than 20 years, all around the United States and for the US Air Force in Bermuda and Pakistan. She retired from Edgewood Academy in Elmore, Alabama as a beloved 1st grade teacher and Drill Team founder/sponsor. Her passion in life (other than her family) was the theater. In 1979 she and several friends decided their town needed a community theater, and so the Wetumpka Depot Players were born. Including the word “depot” in the name honored both part of the town’s and Patsy’s family histories — the group’s first home was in the old L&N railroad depot where Patsy’s grandfather had served as station master. Patsy corralled a band of volunteers to scrape decades of paint off the building through a long hot summer, and eventually it was transformed into a usable performance hall in time for its first production in 1980. And though early patrons had to use hand held paper fans in the summer and wrap in blankets in the winter, the Depot Players grew and thrived, moving into an upgraded venue in 1999. For more than 40 years it has introduced countless area residents of all ages to the magic of community theater, carrying on the legacy of Patsy and many dedicated volunteers. She directed and appeared in more than 90 productions during her life in Alabama, and after moving to St. Augustine more than 15 years ago, she brought those skills to the Limelight Theatre, teaching and directing several mainstage performances and children’s plays there. She was the consummate hostess of late-night theatre cast parties where the problems of the world were often solved, and if they weren’t, just hearing Patsy’s distinctive peaks of laughter somehow made things seem better. And her wit and wisdom weren’t just confined to personal interactions. For someone who never used Facebook, she had quite a following due to her daughter's sharing of her down-home anecdotes and wry, sometimes laugh-out loud, observations on life. Patsy was simply a force of nature, as vibrant as her perfectly coiffed red hair, squeezing every drop out of life and encouraging others to do the same. A grand Southern dame, a witty Steel Magnolia with that unmistakable laugh and a voice that could bring you to heel when she caught you screwing up. She was known for her infamous “in the car talks,” where she not so gently guided/corrected not only her daughter and grandchildren, but also their friends, her friends, multiple drill team members and anyone else she cared about. Patsy’s surviving family includes her daughter Beth Butler Lambert and her grandchildren Rachel Robertson and Butler Robertson, whom she adored and who followed her footsteps into the world of theater; her close friend Patric Robinson, who she loved dearly and collaborated with on numerous productions together, on stage, off stage and backstage. And of course, Stanley. Celebrations will be held on August 2, 2021 at 6pm in St. Augustine, FL at The Limelight Theatre and August 29 at 2pm in Wetumpka, AL at The Wetumpka Depot Players. Contributions honoring the life force that was Patsy Butler can be made to the Limelight Theatre or the Wetumpka Depot Players towards Patsy’s Playhouse, a script lending library for patrons and students.

Patsy Daniel Butler, 82, passed away peacefully at home in St. Augustine, FL, on June 4, 2021, surrounded by her loved ones and under the compassionate care of Community Hospice. The only child of Bill and Elizabeth Daniel, Patsy was born Aug.... View Obituary & Service Information

The family of Patsy Daniel Butler created this Life Tributes page to make it easy to share your memories.

Patsy Daniel Butler, 82, passed away peacefully at home in St....

Send flowers to the Butler family.