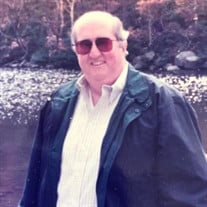 Peter Michael Smith of St. Augustine, FL and formerly of Cohasset, MA and Dedham, MA passed away peacefully on August 20, 2020; two days after his and Maureen’s 58th Wedding Anniversary. Peter was born on June 27, 1938 in Everett, MA, the fourth son of Raymond A. Smith and Ethel (Morrison) Smith. Peter is survived by his wife of 58 years, Maureen F. (Fairbairn) Smith of St. Augustine, FL, his sons, Peter M. Smith Jr. and his wife, Maribeth, of Middleton, NH, and Christopher J. Smith and his wife, Karen, of Medford, MA along with Patricia Smith of Leonardtown, MD; a niece whom Peter loved and treated as a daughter. Peter leaves his grandchildren Peter and Declan of Middleton, NH, Kaleigh of Stafford, VA and Connor and Meghan of Medford, MA. He is also survived by his sister-in-law Therese Smith of Exeter, NH and many nieces and nephews. Peter was predeceased by his brothers, Albert and wife Louise, Raymond (Buddy) and Warren. Peter had an infectious smile that would light up any room whenever he entered. His calm demeanor and ability to navigate through challenges this world throws at us was perfectly suited for a career in education; his willingness to offer guidance and a helping hand to anyone in need was a true testament to how he lived his life – for the service of others. Peter loved his family and friends very deeply and had a love for all of the administrators, teachers, counselors and staff that worked with him, but the biggest place in his heart went to educating, supporting and mentoring his students. Peter’s passion for education is carried on with his oldest grandchild, Kaleigh. Peter served in the United States Air Force (Reserves), serving oversees during the Berlin Crisis of 1961. He graduated from Boston State University, Northeastern University and Boston University, dedicating his life to public service as an educator. Peter taught at Westford Academy and Hamilton High School before becoming Principal at Van Buren (ME) High School, Headmaster at Lawrence High School, Principal at Dedham High School and then Assistant Superintendent at Dedham Public Schools. Peter was active as a long-time member of the Dedham Rotary Club, where he was a recipient of the Paul Harris Fellow Rotary Award. In his retirement in Florida, Peter worked for The Catholic University of America (DC) in recruiting and admissions, served as President of Catholic Charities, served as Vice President on the Board of Directors of the Royal Pines at the World Golf Village as well as serving on the Board of Directors of St. Joseph Academy in St. Augustine and Bishop Kenny High School in Jacksonville. Peter was an active member and volunteer at Our Lady of Good Counsel Catholic Church in St. Augustine. Peter will have a Mass of Christian Burial at Our Lady of Good Counsel Catholic Church, 5950 State Road 16, St Augustine, FL 32092 at 10:00 am on August 27, 2020. There will be a Celebration of Life for Peter at a date to be specified by the family in the future.

The family of Peter Michael Smith created this Life Tributes page to make it easy to share your memories.

Send flowers to the Smith family.