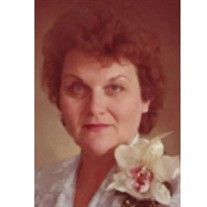 Phyllis Anne Beckley Roy, (Born August 30, 1929, Died December 8, 2021). Mother, Administrator, Master Quilter, and Animal Lover. Phyllis died in her home surrounded by her loving family after an extended illness at the age of 92. Mother to Randy, Reynold, Rick, Rob, Jim and Catherine, she is also survived by numerous grandchildren and great-grandchildren and her Sister-in-Law, Pannee Beckley and her three children. Phyllis was a descendant of John James Beckley, the first Librarian of Congress. Her family founded the city of Beckley, West Virginia. She was the daughter of Meta Spackman Beckley and Stuart Alfred Beckley, a Colonel in the U.S. Army, because of this she was raised on Army bases around the world. She even taught kindergarten as a teenager in Japan in the 1940s! Throughout her career as a secretary and administrative goddess, she was always the organizer and problem solver, she saved Tallahassee Regional Memorial Medical Center over $80,000! She always started out as a secretary and ended up an administrator or manager. She was excellent! She was hard-working and honest at all that she did on the job. She was a master quilter! It was her passion; it was really an avocation. And she was good at it! Also, she always had plants covering every place in the house. And she loved to collect teddy bears and baby dolls, the tinier the better! In the past, she always had animals around the house. One of her favorites was PeePee, yes, that was her name, a sweet dog! From the 1980s on she was an avid cat Mom. First, it was Charles and Annie who were with her for almost 20 years!! Then came Alice and later Alice’s baby, Beauty. She loved her kitties with a passion and with such appreciation and love. If you had a problem, she would try to solve it! When asked, she always gave great advice. She cared about people, even strangers. And she seemed to know everything about the people she met in a short time…their family history, health, love situation…you name it, she always found out. Here is how we describe Phyllis Anne Beckley Roy: She was called: Mom, Mother, Mama, Ms. Phyllis, Meemaw, Grandma, Grandmother, and Buddy. She was funny, she was kind, she was strong, she was smart, she was loving, she was generous and...SHE IS LOVED! Instead of a service at this time, there will be a celebration of life gathering for her family in the near future. In place of flowers, the family requests that donations be made in Phyllis’ honor to the ASPCA.

The family of Phyllis Anne Beckley Roy created this Life Tributes page to make it easy to share your memories.

Send flowers to the Roy family.