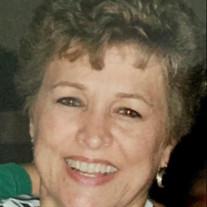 Priscilla Emily (Goedde) Wenner, 78, went to be with the Lord peacefully on March 17, 2021.  She was an only child born to Joseph and Emily (Czubachowski) Goedde in Detroit, Michigan. Her childhood was simple and filled with love. While in the 11th grade at Regina High School, Priscilla met her late husband of 33 years, Wayne Wenner. They married in 1963, were blessed with three daughters, and moved to Florida in 1979. From a young age, Priscilla had a strong faith in God which was exemplified by her positive outlook and peaceful demeanor in life. She was known for her bright blue eyes and beautiful smile that would light up her surroundings.  Priscilla lived a selfless, dedicated life as a homemaker. She devoted much of her life to caring for her daughter Bonnie, who passed away at the age of 43; while at the same time running a sewing and embroidery business, Purrfect Stitches, in her home. After moving to Jacksonville in 1981, Priscilla joined the Mandarin Newcomers Club, which she fondly referred to as “her surrogate family”. As a founding member of Encore, later renamed The Mandarin Women’s Club, and finally The River City Women’s Club, Priscilla served as their first president in 1985 and president again in 1988 and 1996. She was a dedicated volunteer at the Mandarin Food Bank for over 20 years going above and beyond feeding the local needy, taking food to the migrant workers in the surrounding area, and doing whatever was asked of her. She designed and made many personalized items to recognize the work of the Food Bank Team.  Priscilla was a faithful member and tireless volunteer at St. Joseph’s Catholic Church. She served as a Sacristan at both the daily Mass in the Historic Church and Sunday Mass in the Main Church, as an Extraordinary Minister of Holy Communion, and taking Communion to the homebound. As a member of Mercy Associates, she helped to spread the Divine Mercy devotion. Through her home business, Priscilla donated her time and talent to alter vestments and personal clothing for the parish priests, design and make altar linens and scapulars for the altar servers, just to name a few.  Her talents were many, including:  sewing, crafting, playing the clarinet, saxophone and organ, rose gardening, cooking, baking, and candy making. She also enjoyed spending time with family and friends, traveling, gardening, reading, playing cards and games, and doing things for others. She will be deeply missed by her daughters, Debbie Hughes and her husband Chip, Linda Salvatore and her husband Joe; her grandchildren, Shelby (Kyle) Hughes Anderson, Andrew Salvatore, Matthew Salvatore; brothers-in-law, Tom Wenner, Rick (Chris) Wenner.  In addition to her parents, Priscilla is preceded in death by her husband Wayne, daughter Bonnie Wenner, grandson Jason Hughes, sister-in-law Barb Wenner. Visitation was held on Monday, March 29th in the Marian Center of St. Joseph’s Catholic Main Church from 6-8pm.  A funeral Mass was held be celebrated at 10am on Tuesday, March 30th at St. Joseph’s followed by burial at the church cemetery and a reception at the Cody Center.  In lieu of flowers, a donation to either the Mandarin Food Bank or the St. Joseph’s Capital Campaign would be appreciated.  To view the service please visit the link below. https://view.oneroomstreaming.com/authorise.php?k=1617728279109281

Priscilla Emily (Goedde) Wenner, 78, went to be with the Lord peacefully on March 17, 2021.  She was an only child born to Joseph and Emily (Czubachowski) Goedde in Detroit, Michigan. Her childhood was simple and filled with love. While in... View Obituary & Service Information

The family of Priscilla Emily Wenner created this Life Tributes page to make it easy to share your memories.

Priscilla Emily (Goedde) Wenner, 78, went to be with the Lord...

Send flowers to the Wenner family.