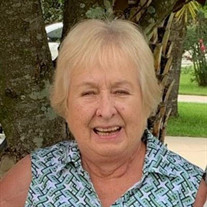 Former Montrose resident Prudence Rae Rinne died peacefully in her home on Sunday, August 8 2021, in St. Augustine, Florida. Pru was born on April 9, 1949 in Ouray, Colorado to Harry R (Bud) Scott and Betty Jean (Sanders) Scott (Tessman). Pru spent most of her childhood in Ouray, until moving to Montrose with family mid high school. It was there she met her first husband, Richard (Dick) Deines. They had three children, Amey, Paula and Matt and were married from 1964 - 1978. Pru went to work for Tri-State G and T in Montrose and held numerous positions spanning 31 years until she retired in 2011. During this time, Pru met and fell in love with Pat Rinne. They were married in 1989 and spent the next 32 years hand in hand until Pat’s death May 16 th , 2021. Pru’s happiness was found in the company of her children, grandchildren, great-grandchildren, close friends and the love of her life, Pat. She and Pat lived blissfully, traveling the country in their motorhome, and finally relocating to Saint Augustine, FL in 2017. Pru always enjoyed reading a new book on her patio while watching beautiful native birds on the water, with the white egrets and blue herons as her favorites. She also spent her time in Florida visiting with friends, rooting for the Denver Broncos, and never missing the chance to appreciate a beautiful sunset. Pru was an amazing wife, mother, Granny and friend. She was known for her laugh and various family celebrations on the patio, open to anyone who wanted to stop by. Pru is survived by her children, Amey and John Jutten of Palisade Nebraska, Paula and Terry Young of St. Augustine Florida, and Matt and Blythe Deines of Vashon Island Washington, along with her 10 grandchildren and 4 great grandchildren. She is also survived by her brother Ross Scott of Mt. Vernon Washington. A celebration of life will be planned at a later date.

The family of Prudence Rae Rinne created this Life Tributes page to make it easy to share your memories.

Send flowers to the Rinne family.