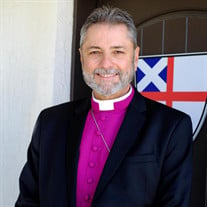 The Rt. Reverend Ian Dartland Anderson, 65, passed into the arms of our Savior on Easter Monday, April 5th with his wife, Robin, by his side. Ian grew up in California, graduating from Fresno High School. He was a classically trained percussionist and played with the Fresno Philharmonic while still in high school. His love of all types of music would last a lifetime. Eventually, he mastered the Highland bagpipes, Scottish side drumming, and even the newly created the Zen drum. During a recent trip to Las Vegas, he and Robin were privileged to meet and greet with Ian’s favorite band, Chicago. Ian was a man of unshakeable faith from his earliest years. He answered the calling to ministry, earning a doctorate degree in theology from Evangelical Theological Seminary in 1989. He was ordained to the priesthood shortly thereafter by the American Episcopal Church in 1990. Before moving to Maryland in the late 1990’s, Ian was the rector of the beautiful and historic St. Mark’s Episcopal in Portland, Oregon. God called Ian to follow a new direction in his ministry by planting an Anglican church in St. Augustine, FL. Resurrection Anglican Church began as a small but mighty church family and continues today. Ian was consecrated to the office of Bishop of the Reformed Anglican Church in October of 2009, eventually serving as the Presiding Bishop of the National Church. Ian also spent many years secularly working as a film editor for cinema and television. He pursued a career in television network news programing and corporate videos, ultimately teaching at the Defense Information School in Washington, D.C. He particularly enjoyed his voice over work while working for America’s Voice in Washington, the network that became Fox News. Ian met Robin, the love of his life, at the annual Grand Haven, Michigan Coast Guard Festival in 2003. They were both accomplished and award-winning bagpipers with Ian serving as the United States Coast Guard Pipe Band Pipe Major. One of his greatest joys was going to the famous Military Tattoo in Edinburgh, Scotland and seeing the greatest pipe bands in the world. Both Ian and Robin enjoyed competitive bagpiping and drumming in various Highland Games in the Southeastern United States. It’s no secret that Ian and Robin love to travel. Upon marrying, they promised each other a lifetime of fun, romance, and discovery. They could be found at any given time, cruising the highways in their motor home, affectionately called “Two Hearts,” towing their Harley, “Red Bird” along for backroad discovery. Seeing Europe, whether on a cruise ship - or better, getting deliberately lost on the country roads of a foreign country in a rental car was their idea of perfect adventure. Some of their most memorable trips include riding their Harley in Rolling Thunder each Memorial Day in Washington, D.C. Fundraising for America’s veterans and MIA was near and dear to Ian’s heart. Participating with one million other veterans and patriots never failed to bring him to tears. More recently, he delighted in giving up the driver’s seat to Robin with their purchase of their Polaris, Slingshot. Riding the steep mountain twists and turns provided a whole new level of excitement and exhilaration for them both. Ian is preceded in death by his parents, Walter and Avery Anderson, and his two sisters, Cristi Anderson and Aleasha Zumbar. Ian is survived by his dedicated and loving wife, Robin; his sister, Clarice Anderson; 3 children, Jacqueline Faith Anderson, Joshua Leigh Anderson (Tammy) and Bethany Hope Anderson, and 3 stepdaughters Collin Albertsson, Casey Dressendorfer (John) and Connor Wordelmann (Lance). He has 6 grandchildren and 9 step grandchildren. He will be greatly missed by all. In lieu of flowers, please consider a donation to the American Heart Association or a military veteran’s charity of your choice. The funeral service will be held on Wednesday, April 14th at 10:00 am at Craig Funeral Home in St. Augustine, and he will be laid to rest at the Jacksonville National Cemetery at 2:00 pm with a military ceremony. The services will be recorded and live streamed at the link below. https://view.oneroomstreaming.com/authorise.php?k=1618013090109985

The Rt. Reverend Ian Dartland Anderson, 65, passed into the arms of our Savior on Easter Monday, April 5th with his wife, Robin, by his side. Ian grew up in California, graduating from Fresno High School. He was a classically trained percussionist... View Obituary & Service Information

The family of The Rt. Reverend Ian Anderson created this Life Tributes page to make it easy to share your memories.

The Rt. Reverend Ian Dartland Anderson, 65, passed into the arms...

Send flowers to the Anderson family.