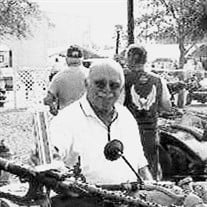 Richard George “Dick” Orsini 8/4/1934 - 04/10/2022 Dick Orsini was born in Bronx, New York. He joined the Navy at the age of 16 during the Korean War, where he served for 5 years. He joined the New York City Fire Department after his military tour and after 5 years was promoted to Rescue 3 in Harlem, NY. Upon his retirement, he took his family to Florida for vacation and stopped in St. Augustine. Here he found his true home. Dick Orsini bought a boat, got his captain's license and was Captain of the Matanzas Queen at Fort Matanzas for 32 years. For those who remember Dick and Ella Orsini opened Orsini’s Pizza House and most of the teenagers of the town at that time worked in the Orsini family atmosphere. Dick Orsini joined the Station 6 Volunteer Fire Department and after serving as Lieutenant and Captain, Dick Orsini became Chief of Station 6 Volunteer Fire Department. As Chief he joined the then current Chiefs of the community in helping train young volunteers, volunteers who some, went to the academy and became professional firefighters themselves. Due to the small size of the station, Dick Orsini, together with the Station Six Crew, sent out letters to the Crescent Beach Community asking for donations to build an updated and more solid Fire Station. With the help of the Crescent Beach Community a new Fire Station was built with all the updated technology and equipment needed at that time was and still is located at 5865 A1A South. When St. Johns County went to complete professional firefighters in the County, Station Six stands for the Community participation project that helped to create a Professional firefighter’s ability to handle emergencies in the Crescent Beach area. Dick was a lifetime member of the Elks, VFW, the Masons, and the Knights of Columbus where he annually cooked the Right to Life dinners. Richard “Dick” Orsini is survived by his daughters Diane Orsini, Rosanne Orsini, and Maria Orsini-Johnson. He is also survived by his grandsons Richard Orsini, Hunter Johnson, Derrick Dees, Nathan Dees, Shawn Dees, and Caleb Dees. The Funeral Service will be at Craig Funeral on April 16, 2022, at 10:00am, officiated by the Reverend Father Tom Willis, with Military Honors and St. Johns County Fire Department Honor Guard.

The family of Richard "Dick" Orsini created this Life Tributes page to make it easy to share your memories.

Send flowers to the Orsini family.