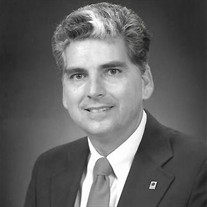 Robert H. McDermott, 76, peacefully passed away February 27, 2019 in Jacksonville, Florida of Bone Marrow Cancer. He was a true warrior and fought this disease for 3 years like no one else ever could. Bob was born September 30, 1942 in Washington, DC to the late Thomas E. and Anna Lee McDermott. His family moved to Ormond Beach where he graduated from Mainland High School in 1961. Bob is survived by his wife of 56 years, Joni, son, Dean (Sonya), daughters, Dana, Dawn Ojeda (Milton); grandchildren, Mackenzie (Ryan), Joshua and Benjamin. His brother, Larry (Lucille) and sister, Barbara Myrick, along with a very long list of beloved family and lifetime friends. He began his career as a bag boy at Publix, working through the ranks to manager of the South Daytona and Tallahassee stores. From there he was promoted to the Lakeland Division, as Director of Publix Presto! and EFT Systems. Bob was known for his positive attitude and heartfelt enthusiasm for life. His love for his family, friends and co-workers knew no boundaries. And it was because of this gift, that his last promotion with Publix was as “Spokesman” for the company. He retired after 35 years in 1993. In continuing his love for working with people, he and his family moved to Jacksonville in 1995 and opened a “Play It Again Sports” store. A Memorial Mass will be celebrated for Bob on Tuesday, March 19, at 11:30 at St. Josephs’ Catholic Church in Mandarin, Florida. Immediately following, we will gather to honor and celebrate Bobs’ life with a reception at the churches’ Cody Enrichment Center. Internment will follow at a later date at the Ormond Beach Cemetery, where many of Bobs’ family and friends rest. For those who wish to send flowers, they can be sent to the church or you may contribute to the MD Anderson Cancer Center in Jacksonville, Florida in his name.

Robert H. McDermott, 76, peacefully passed away February 27, 2019 in Jacksonville, Florida of Bone Marrow Cancer. He was a true warrior and fought this disease for 3 years like no one else ever could. Bob was born September 30, 1942 in Washington,... View Obituary & Service Information

The family of Robert "Bob" McDermott created this Life Tributes page to make it easy to share your memories.

Send flowers to the McDermott family.