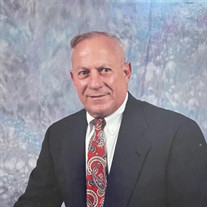 Robert Anthony Meisenheimer died peacefully on Jan. 10 in St. Augustine, Florida, with members of his family by his side. He was 88. Robert, also known as Bob or the Colonel, was born on Nov. 13, 1933 in Peoria, Illinois to Walter and Marie (Lancelotti) Meisenheimer. His mother, who immigrated to America from Bologna, Italy with her siblings in the 1920s, was a huge influence on Bob and his sister, Marlene’s lives. She was a big reason why Bob received an appointment to the U.S. Military Academy at West Point. Bob graduated from West Point with the class of 1955 and entered the Air Force where he was trained to be a pilot. In 1958, he married Nancy Louise Foy, a nurse from Grand Rapids, Michigan. The couple lived for a short time in Selma, Alabama and then in Ames, Iowa, where Bob received a master’s degree in nuclear engineering at Iowa State University. Bob and Nancy had two children before moving to Albuquerque, New Mexico, where they had three more children. The family moved to Newport, Rhode Island when Bob was assigned to attend the U.S. Naval War College and then transferred to Homestead AFB in Florida. In 1968, Bob entered the Vietnam war, assigned to the 12th TAC Fighter Wing at Cam Ranh Bay, where he flew Phantom F-4s, providing tactical air support of ground troops. This was a meaningful mission for Bob because ever since his West Point Army training, he had always wanted to support troops in contact with the enemy. Although he was in Vietnam for only a year, the experience left a lasting impact. “There were many hours of exhilaration followed by pride and satisfaction for succeeding in combat with the enemy. Intermingled with exhilaration were instances of stark fear,” he said in a West Point alumni publication. Bob left Vietnam with just shy of 200 missions and received many decorations, including three DFCs, (Distinguished Flying Cross), 10 air medals, a Vietnamese Gallantry Cross with Palm, the Air Force Commendation Medal and the Republic of Vietnam Commendation Medal. Bob served a tour at the Pentagon after he left Vietnam. He then went to Webb Air Force Base in Big Spring, Texas, as base commander and CO of the 78th Flying Training Wing. Next, he commanded AFTAC, a command stationed at Patrick AFB, Florida, where he led people stationed across the world who were responsible for monitoring foreign nuclear weapons testing and development. While he couldn’t speak of his work with AFTAC in detail, it most likely contributed to the U.S. winning the Cold War. After retiring from the Air Force in 1984, Bob continued to travel the world and apply his engineering skills in service of the U.S. military, working for military contractor TRW. He retired from TRW in 1999. Bob’s military service and his passion for travel led him to visit every continent except Antarctica. He loved to spend time in Germany. Bob was an avid fan of many things, including the Chicago Cubs, the Florida Gators, a good piano bar and all kinds of music, especially songs from Andrew Lloyd Webber musicals and anything sung by Willie Nelson. He enjoyed his life and never wasted an opportunity to celebrate it with others, including friends and strangers and especially his family and extended family. A Gator tailgate party wasn’t complete until he arrived (with deviled eggs). In fact, Bob and Nancy’s pregame spreads and postgame partying helped enhance ’70s and ’80s Gator football for his children and their friends. He was a supportive father in so many different ways, always beaming with pride at the accomplishments of his children and their children and encouraging each to be the best part of themselves. He had strong opinions forged from a life well-lived and was not shy about expressing them but also unafraid to stop and listen to another viewpoint. Bob was preceded in death by his father, Walter; his mother, Marie; his sister Marlene; his beloved wife of 30 years, Nancy; and his son, Michael. He is survived by his wife and best friend Mary Ellen; his children, Kelly Fetto (Frank); Robert, Jr. (Mary Ellen); Sherry Smith (Dick); and Karen Dooley (Pat); his grandchildren Frankie, Mike, Hogan, Hayden Kelsey, Emma and Aiden, four great grandchildren and many other loved ones within his blended family, including step children, step grandchildren and great grandchildren. A funeral at Arlington National Cemetery will be held at a later date. In lieu of flowers, please consider a donation to the Wounded Warrior Project. Visit woundedwarriorproject.org.

Robert Anthony Meisenheimer died peacefully on Jan. 10 in St. Augustine, Florida, with members of his family by his side. He was 88. Robert, also known as Bob or the Colonel, was born on Nov. 13, 1933 in Peoria, Illinois to Walter and Marie... View Obituary & Service Information

The family of Robert Anthony Meisenheimer created this Life Tributes page to make it easy to share your memories.

Send flowers to the Meisenheimer family.