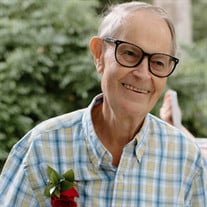 Born on July 17, 1948, in Middletown, NY, to Dr. Lester and Mrs. Rhoda Mermell, Robert "Bob" Mermell passed away on March 1, 2022, in St. Augustine, FL with his wife of over 50 years, Henriette “Jet” Mermell and other family members by his side. A beloved husband, father, and grandfather, accomplished businessman, and fervent community activist, Bob passed away after a lengthy battle with prostate cancer. Bob graduated from Middletown High School in 1966, and later from the College of St. Rose with a B.S. in Marketing and Advertising. He was a proud Eagle Scout, and an even prouder father of an Eagle Scout from Honesdale’s historic Troop 1. To Bob, degrees and honors (as he liked to call them, “feathers in your cap”) were nice, but what really mattered was family and community. He was fiercely committed to both. One half of a romance straight out of a Hollywood movie, in 1965 Bob was a senior in high school when he met Jet deWit - that year’s exchange student from the Netherlands to Middletown. He was instantly smitten. She came around. They fell in love, kept in constant contact by letter following Jet's return home after her exchange year, and were married on August 6, 1971. They still have the letters. After initially settling down in Middletown, where Bob worked at First Federal Savings and Loan and lent his booming radio voice to Sunday evening stints on WALL-AM radio, the couple moved to Honesdale, PA in 1977. Bob became the co-owner and later sole owner of WAEN-Radio in Honesdale, eventually growing the business into deWit Media Corp. (named after his bride) and adding on WDNH FM and AM, WYCY FM, and All News 102. A natural entrepreneur who believed in the importance of small businesses to a town’s success, at various points Bob also owned and operated Murray’s True Value Hardware Store and (along with Dr. Alan and Mrs. Connie Charney) the Northeast Regional Kidney Centers. Bob constantly used his platform as a business leader to help the community. While in Honesdale, Bob was a member of what was then the Wayne County Chamber of Commerce, the Honesdale Business Association, and the former Wayne-Pike Chapter of the American Red Cross. He volunteered with numerous community organizations including his son, Peter's, baseball teams. He was a fixture as the emcee of a host of local charity events, made air time on the radio stations available to countless nonprofits from throughout Wayne County, and could never resist a live broadcast to promote a community event. Over the years Bob could be heard broadcasting live from the waters of Lake Wallenpaupack, the midway of the Wayne County Fair, or (true story) from the back of an elephant marching down Main Street in Honesdale to announce the arrival of a travelling circus. For Bob, family always came first. Bob never missed a Little League game or a chorus concert. He was always there for parent teacher conferences, nightly dinners, and family vacations. On their wedding day, Jet carried a single long-stemmed red rose down the aisle. Bob presented her with a single red rose for each Valentine's Day, birthday, Mother’s Day, and anniversary thereafter - including last August when they celebrated 50 years together. For the past decade Bob shined in his latest role: Opa (Grandpa in Dutch). As a loving grandfather to three, no joke was too silly, and no face too funny, in the service of making his cherished grandkids giggle. In 2017 Bob and Jet moved to St. Augustine, FL. There, Bob spent time on the Board of Directors of the Lincolnville Museum and Cultural Center, an organization in which he believed very strongly as one that totally dedicates its mission to the history and cultural importance of historic Lincolnville and St. Augustine. Jet and Bob also were on the Advisory Council of Compassionate St. Augustine, a wonderful group dedicated to the overall betterment of the citizens, young and old, and the businesses of St. Augustine. Known for his quick sense of humor, love of plans and to-do lists, and endless appetite for garlic, Bob's enthusiasm and enjoyment of life shall be missed by all who got to know him and experienced his desire to make better everything in which he was involved. Jet and Bob raised 2 children, Jesse, 41, now of Massachusetts, and Peter, 39, now of South Carolina. Bob also leaves behind Jesse's partner, Pratt Wiley, and Peter's wife, Heather, and their 3 beloved children, Noah, 3, Zoey, 7, and Liam, 10, as well as his sister, Lynda and her son, Ziad, both of Maryland, 2 sisters-in-law in The Netherlands, and as well as many cousins, nieces, and nephews in the United States and The Netherlands. A nondenominational celebration of life shall be held at St. Cyprian's Episcopal Church, 37 Lovett St., St. Augustine, FL, 32084 on Monday, March 7, 2022 at 2:00pm, and also in the spring in Honesdale, PA at a date yet to be determined. In lieu of flowers the family requests that donations in Bob's name be made to the Wayne County Historical Society, 810 Main St., Honesdale, PA, 18431 or SEEDS of NEPA, 1030 Main St., Honesdale, PA, 18431.

The family of Robert "Bob" Mermell created this Life Tributes page to make it easy to share your memories.

Send flowers to the Mermell family.