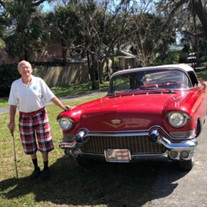 Robert Worrall Quackenbush Born July 18, 1935, Died January 16, 2022 A good man to know. Bob Quackenbush was born in Neptune, NJ, and grew up in Hillsdale, NJ, (Bergen County), the son of Hilda and Lawrence Quackenbush, brother of Richard. It is said that his first word was C A R. The notebook made by those boys cataloging cars that passed the brothers' home is still with us. He is a graduate of Westwood High School, but before he graduated he had secured his first car, a 1926 Chrysler "70" for $25 from the lady across the street, whose lawn he mowed. That car is also still with us. College was for the purpose of becoming a shop teacher. He graduated from Newark State Teachers College, following in the footsteps of his grammar school shop teacher, who had also introduced Bob to a vital relationship with Jesus Christ 03-04-56, a day to remember. A year later he met Virginia Peelle Drill at church, dated her for 4 years, and they married July 1, 1961. He told her the cars came with; he had a '56 Chevy Convertible by then. Five children came along and blessed the couple as they moved to upper New York State (Hannacroix) onto a beautiful 120-acre farm (Green Pastures) with inside storage for more than 50 cars. Bob taught industrial arts at Coxsackie-Athens Central School. Automobile Mechanics was one of the courses that he taught. Jeffrey Robert Quackenbush, David Loyd Quackenbush, Jennifer Peelle Quackenbush, Deborah Lawrence Quackenbush and Nancy Jane Quackenbush -- all flourished, laughed, grew up, worked, with the cows, ponies, and of course, cars that were accumulating over the years. Winter weather was a deciding factor in bringing Bob and Jinny and the five kids to St. Augustine in 1979 along with some of the cars. They had purchased Breezy Brae Mobile Home Park, so everyone worked very hard and they were able to acquire more cars along with enjoying the sunny St. Augustine weather. Trinity Chapel (now Destiny Church) provided faith and friends for many years. Bob helped get Trinity Chapel Christian School going. In 1987 the couple saw an ad for an old hotel on the St. Johns River while dining out. Bob reconstructed the old Groveland Hotel that was formerly at Federal Point. The kids helped a lot and we did some fun waterskiing too. The Ancient City Auto Club was founded by a group of car enthusiasts of which Bob was a founding member. Some of Bob's former cars can be seen at the Classic Car Museum, south on US 1. Grandchildren include Parker, Logan, Hudson, and Olivia (Jeff's), Emily and Sarah (David's), Bobby, Henry, Tommy, and Nico (Debbie's) and Christian and Westly (Nancy's). Wonderful in-laws include Renee Quackenbush (Jeff's), Glenn Campbell (Jennifer's) Rob Guild (Debbie's) and Lloyd Davis (Nancy's). All loving family and friends will miss Bob's humor and distinctive style. There will be a time to remember Bob at the St. Augustine Classic Car Museum 4730 US 1, St. Augustine, 32086 from 5-7 p.m. on Friday, January 21 and a memorial service at St. Paul's Episcopal Church at Federal Point, 124 Commercial Avenue, East Palatka, FL 32131 on Saturday, January 22, 2022 at 10 a.m.

The family of Robert Worrall Quackenbush created this Life Tributes page to make it easy to share your memories.

Send flowers to the Quackenbush family.