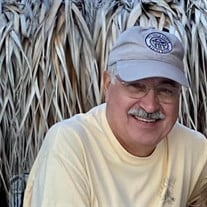 Writing an obituary for a man who was a gift from God to our family and close friends is no easy task. Robert Francis (Bobby) Rousseau age 75 passed away quietly on Sunday, April 24, 2022, from brain cancer, at the Bailey Center in St. Augustine. Bobby (as he is known to many) was born in Florida East Coast Hospital in St. Augustine, Florida, on January 7, 1947, where he grew up, graduated from St. Augustine High School, and then moved around Florida, Puerto Rico, and back to St. Augustine. Bobby is survived by his wife, Jill, sons Christopher Rousseau (Amy), Jimmy Williams (Mandi), Joe Williams (Becky), and Jay Williams. He is also survived by his Sister, Evelyn Plunkett (Danny). He also leaves behind a “daughter,” Allesha Irvin Schirmer (Chris), who has been a light in his life since the day she was born. He also leaves behind four grandchildren, Paxton and Paisley Williams, Charleston, SC, and Lyla and Georgia Williams, of St. Augustine. He is preceded in death by his father, Chester Gordon and mother, Frances Juanita; also his brother Jimmy Rousseau (Annette), all of St. Augustine. Bob began working part time during high school at the Barnett Bank of St. Augustine and also in the beautiful old movie theater downtown, about which he told fascinating stories of what happened behind the scenes. After high school, he joined the Florida National Guard, and after graduating from Officer Candidate School and leaving the guard, he went on to work for the Florida East Coast Railroad and traveled up and down the coast of Florida working for the railroad. In June of 1976, he joined Crowley Maritime as Director of Equipment Control Operations. Bob retired from Crowley in March of 2013 as Vice President of Equipment. Bobby’s life centered around many close friends and family. He amazed us at his ability to calculate almost any numbers or percentages in his head, and he developed an extensive amount of work on Ancestry about his heritage. In the summer of 2021, Bobby and his friend, Jim, drove to Texas and back, visiting long lost relatives and seeing headstones and plaques dedicated to his ancestors. He was a proud member of St. Augustine High School’s Class of 1965, and he was known as their “leader,” head of all preparations for reunions. Many meetings were held before the reunions, and he was, as they said, the “Engine” that drove the train. It was said by many that the meetings were as much fun as the reunion itself. Unfortunately, he was unable to attend the reunion just last month. His close friend, Greg, took the reigns from him, although he said no one could do it like Bobby did. Bobby will be cremated by Craig Funeral Home and a memorial service will be held at Anastasia Baptist Church at 11:00 a.m., on Tuesday, May 3rd, with a fellowship there afterward. In lieu of flowers, please consider donating to The Bailey Center or Anastasia Baptist Church, both of St. Augustine

Writing an obituary for a man who was a gift from God to our family and close friends is no easy task. Robert Francis (Bobby) Rousseau age 75 passed away quietly on Sunday, April 24, 2022, from brain cancer, at the Bailey Center in St. Augustine. Bobby... View Obituary & Service Information

The family of Robert "Bobby" Rousseau created this Life Tributes page to make it easy to share your memories.

Writing an obituary for a man who was a gift from God to our...

Send flowers to the Rousseau family.