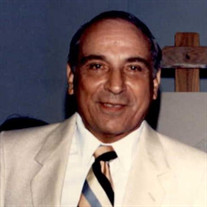 Dr. Robert E. “Doc” Solomon, JD, passed away on May 17, 2022, at the age of 99 after a life dedicated to his family, country, and community. He was born in Uniontown, PA, in 1923 to Jacob and Edith Solomon. During WWII, he joined the US Coast Guard and served aboard Navy frigate USS Groton, PF29, escorting and protecting war supply and troop ship convoys against Nazi U-boats in the North Atlantic Ocean. After the war, he attended Waynesburg College and the University of Miami School of Law with the aid of the GI bill. After graduation, he practiced law in Miami for a brief time before beginning a career as a Special Agent with the Federal Bureau of Investigation. During the majority of his FBI career, he was assigned to the New York City Field Office, where he supervised the counter-espionage section, one of the largest sections of the bureau, containing 74 Special Agents and many more civilian employees and language translators. It contributed greatly to the fall of the Soviet Union and the end of the Cold War. Upon retiring from the FBI in 1974, he accepted an instructor position at what is now St. Johns River State College in Palatka, FL. Affectionately known as “Doc” to his students, he taught Constitutional and Business law as well as advanced training classes to law enforcement officers throughout the North Florida region. As the college expanded and opened campuses in St. Augustine and Orange Park, Doc, along with his friend and colleague, Col. George Higgins, pioneered advanced law enforcement training and education to St. Johns, Clay, and Putnam Counties. This was accomplished in coordination with the State of Florida Commission on law enforcement standards and training. A favorite among his academic accolades was being named “Instructor of the Year” numerous times by vote of the students. Perhaps his proudest academic honor was receiving the dedication of the Higgins-Solomon Criminal Justice Center located on the St. Johns County campus of SJRSC. Dr. Solomon was proud to see his students excel in their careers. His academic legacy will live on in the countless students and law enforcement professionals that he touched with his dynamic personality, quick wit, inspiration, and encouragement. Upon retiring from the college, he and wife, Freda, undertook the moving and restoration of the antebellum era “Reid/Adams” house from downtown Palatka to historic Browns Landing, several miles away. A history buff, Solomon saved the important and majestic home of Palatka’s first medical doctor which was slated to become a training structure for the fire department. Hundreds of on-lookers, as well as two regional television news helicopters, turned out as the entire structure was slowly and methodically trucked onto a barge and pushed up the St. Johns River by tugboat to its new resting site at Brown’s Landing. There it was lovingly restored by the Solomons and remained their home for many years, before they moved to Crescent Beach, FL. Dr. Solomon is survived by his loving wife Freda Solomon, his son Kenneth Solomon, and daughter Cynthia Solomon Miller (Paul Lee). Three grandchildren: Rachel Solomon Page (Max), Tiffany Solomon Barker (Dustin), and Morgan Miller McCall (Nick), as well as five great-grandchildren. Also, many nieces and nephews to whom he will always be, “Uncle Bob.” He was preceded in death by his son Jeffrey Solomon and his brothers Melvin and Syd Solomon. A memorial in his honor is scheduled for 11am on June 16, 2022, at the Higgins-Solomon Criminal Justice Center on the campus of St. Johns River State College in St. Augustine, FL. Flowers are gratefully declined and those wishing may make a contribution in his memory to the Council on Aging of St. Johns County. Craig Funeral Home in St. Augustine will handle the arrangements.

The family of Dr. Robert Edwin Solomon created this Life Tributes page to make it easy to share your memories.

Send flowers to the Solomon family.