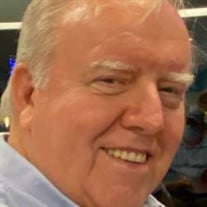 Roger Samuel Cash, 77, of St. Augustine Florida, formerly of Yarmouth, MA, passed away unexpectedly at his home on November 11, 2021. Roger was the husband and best friend of Judith M. Scott-Cash for over 40 years. Roger was borned and raised in Barnstable, Massachusetts. He is the son of the late William L. and Melissa A. (Crosby) Cash. He is survived by his devoted wife, Judith M. Scott-Cash, his children Judith (and Steven) Corey, Sharon Cash, Roger Scott Cash, and Michelle (and Matthew) Chapman. His grandchildren, Jaime and Abigale Corey, Reagan, Harrison and Capri Chapman. Also survived by many nieces and nephews. He was preceded in death by his parents, his brother, William Cash and sister, Melissa Bearse. Roger proudly served his country in the United States Marine Corps, then went on to be a Barnstable Police Officer. Following his retirement from the Barnstable Police Department, Roger pursued a second career as a Funeral director. As an active member in his Catholic church communities both on Cape Cod and in Florida, he served as a District Deputy and current Grand Knight respectively. What Roger valued most was his family. He loved nothing more than being a husband, dad, and papa. He enjoyed spending time with his friends, and pets and enjoyed traveling. Roger had a genuine calling to help those in need. If you were fortunate enough to call him a friend, you knew what a true friend was Visiting hours will be held Wednesday at Craig Funeral Home from 4:00 pm to 7:00 pm. The Rosary will be said at 6:00 pm. A Mass of Christian Burial will be held at 12:00 pm at Corpus Christi Church with burial to follow at San Lorenzo Cemetery at 1:30 pm. In lieu of flowers, donations may be made to Cenocolo 9485 Regency Square Blvd, Suite 110 Jacksonville, FL 32225

Roger Samuel Cash, 77, of St. Augustine Florida, formerly of Yarmouth, MA, passed away unexpectedly at his home on November 11, 2021. Roger was the husband and best friend of Judith M. Scott-Cash for over 40 years. Roger was borned and raised... View Obituary & Service Information

The family of Roger Samuel Cash created this Life Tributes page to make it easy to share your memories.

Send flowers to the Cash family.