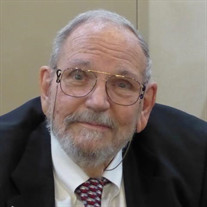 Roger Van Ghent passed away peacefully in his sleep on June 2, 2022, at Moultrie Creek Nursing & Rehab Center. He was born in San Francisco in 1935. His parents were J. Roger Van Ghent and Professor Dorothy Van Ghent. In his early years, he moved with his mother to various university towns in the US plus some years in Mexico. After attending the University of Vermont and City College of New York, he worked as a software engineer at Time Inc., NBC, Chase Manhattan Bank and Bell Labs. While working at Time Inc., he, and his future wife, Christina, developed the first computerized budget, a milestone at that time. He later started a software engineering company where he consulted and advised software engineers on management policies and development of product and process standards. He educated and trained developers and evaluated and measured software engineering programs. In the late 80’s he focused on the software engineering program at NYU’s School of Continuing Education. He introduced intensive courses at the graduate level in project management, testing and quality assurance. He was a member of the Institute of Electrical and Electronic Engineers (IEEE) and the Association for Computing Machinery (ACM). For many years, he commuted daily on the Long Island Railroad (LIRR). One night in January 1969, as he was in a cold, dark car of the LIRR, the conductor walked in and started taking tickets with a lantern, with no apologies or explanation of the poor conditions. Many grumbled but Roger was the only one who steadfastly refused to give his ticket. He was arrested, booked and subsequently appeared before the judge who declared that Roger had a paid ticket and threw out the case because the LIRR had not provided basic services such as heat, safety and car lights. The media had a field day. A few days later, Johnny Carson invited him to his show and presented him with the Jesse James Silver Streak Award, a toy locomotive. He always loved sailboats - who wouldn’t when growing up in San Francisco by the Bay? He and his wife raced and cruised aboard their 38-ft sloop from New York to Maine. In 1991 he sailed the boat from New York to Florida, but he said once,” There is nothing like sailing in New England waters.” In Florida, he recognized the beauty of the landscape, the variety of birds and wildlife, and determined to support the environment. He joined the local chapter of the Audubon Society and became Conservation Chair and later President of the St. Johns County Audubon Society and a Board member of Florida Audubon. He co-wrote the Audubon Green Paper on Water predicting the use of reverse osmosis to supplement our potable water supply. He was appointed twice to the Board of the County’s Land Acquisition and Management Program (LAMP) serving two years as its chairman. He pushed hard for six years to establish a comprehensive Blueway, Greenway and Trails Plan in addition to improving the Strategic Regional Policy Plan, the County Comprehensive Plan and the Land Development Code. Roger founded the St. Augustine Macintosh User Group (SAMUG) and volunteered to help computer users. The club’s first meeting was in 1995 and is still active today with monthly program meetings about all things Apple. He is survived by his wife, Christina, and cousins in California, Washington and Delaware, and many friends. We wish to thank the staff at Moultrie Creek Nursing Home for the exceptional care given to Roger. In lieu of flowers, donations in his memory may be made to the American Bird Conservancy, P. O. Box 249, The Plains, VA 20198 or to the EMMA Concert Association, P.O. Box 860130, St. Augustine, FL 32086. A Celebration of Roger's life will be held 3:00 PM June 28, 2022, at Craig Funeral Home.

Roger Van Ghent passed away peacefully in his sleep on June 2, 2022, at Moultrie Creek Nursing & Rehab Center. He was born in San Francisco in 1935. His parents were J. Roger Van Ghent and Professor Dorothy Van Ghent. In his early years, he... View Obituary & Service Information

The family of Roger Van Ghent created this Life Tributes page to make it easy to share your memories.

Roger Van Ghent passed away peacefully in his sleep on June 2,...