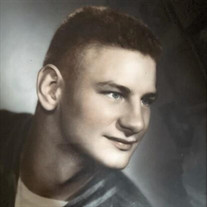 Ronald Steven Pica (85) of St. Augustine, Florida passed peacefully on October 30, 2021 surrounded by loved ones. Ron was born and raised in Trenton, New Jersey by his parents, Nicholas and Helen (Marut) Pica along with his brother Joseph Pica, sister Arlene Zafrano and Foster sister Evelyn Weber. Ron was a graduate of Hamilton High School West and served honorably in the Marine Corps as a private first class. Following his military service he was a member of Amalgamated Meat Cutters Union Local 56 until his retirement in 1996. Ron married Regina Kroehling, also of Trenton, in 1959. They raised five children in Chesterfield, New Jersey. Ron loved to paint and make shell crafts in his free time. He could always be found working a crossword puzzle, popping trivia questions, or watching classic television programs when he wasn’t busy taking care of the house indoors and out. Ron was a loving husband and father. He is survived by his beloved wife of 62 years, Regina and his children and their spouses: John Pica and Kimberly Wilt Pica, Sharon (Pica) Davis and Jeffery Davis, Christina (Pica) Cook and Cory Cook, Suzanne (Pica) Noyes and James Noyes, and Carolyn (Pica) Beer and Mitchell Beer. He is also survived by his grandchildren: Nicholas and Carrie Pica, Allyssa Pica, Eric Haluska, Heather Haluska, Kathleen and Stuart Santos, Ryan Gallagher, Molly Gallagher, and Peter, Jillian and Jesse Beer, one great grandson, Leo Santos and several nieces and nephews. He will be dearly missed and forever in our hearts and memories. In lieu of flowers, memorial contributions may be made in his name to St. Jude Children’s Research Hospital or Disabled American Veterans. Visitation, viewing, and services will be held on Thursday, November 11 from 6-8 pm at Craig Funeral Home, St. Augustine with service at 6:00pm. Burial will be Friday, November 12 at 10 am at Jacksonville National Cemetery.

Ronald Steven Pica (85) of St. Augustine, Florida passed peacefully on October 30, 2021 surrounded by loved ones. Ron was born and raised in Trenton, New Jersey by his parents, Nicholas and Helen (Marut) Pica along with his brother Joseph... View Obituary & Service Information

The family of Ronald Steven Pica created this Life Tributes page to make it easy to share your memories.

Send flowers to the Pica family.