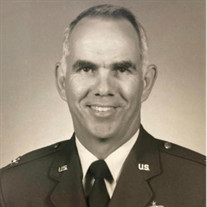 Ronnie Reginald Radford On Saturday, January 23, 2021, Ronnie Reginald Radford, loving husband, dedicated father of three children, and Air Force Veteran committed to America's security and success, passed away at the age of 81 surrounded by family at his home in St. Augustine, Florida. Born March 2, 1939, Ronnie's story is one of achievement. Raised from birth in St. Augustine by his parents, George and Lillian, Ronnie came from very modest means, and he committed himself to success early. He graduated Ketterlinus high school having been the valedictorian of his class, president of his class, captain of the football team, and a multisport varsity athlete. He leveraged his high school success to earn an academic scholarship to attend Davidson College where he was a walk on football player, majored in math and physics, and held a job as cook to pay obligations beyond his scholarship. Halfway through his education at Davidson, he received an appointment to attend the United States Naval Academy, joining as a "Plebe" on July 7, 1959. After four years of taking advanced courses due to his two year head start at Davidson, he graduated on June 5, 1963 ranked tenth in his class of 867 graduates. His academic performance garnered the notice of the United States Air Force, who recruited him away from the Navy to attend Stanford University. Within hours of graduating from the Naval Academy, he married Nancy Hall, daughter of former St. Augustine Fire Chief, Brandon Hall, walking under the swords in Annapolis. Upon graduation from Stanford, where he earned his Master's Degree in Aeronautical and Astronautical Engineering, he served his country for twenty-four years as an engineer and program manager supporting crucial Air Force defense initiatives including an Air Force adjunct to the NASA Gemini space program, the F-16 fighter jet, the Advanced Cruise Missile, and the B-1 Bomber among other programs, rising to the rank of Full Colonel, and in the last two years of his career taking on General Officer roles leading thousands of personnel. These roles took him and his family across the country – north, south, east and west - stationed at Air Force bases and the Pentagon. After retirement from the Air Force, he continued his service in various leadership and consulting roles in the commercial defense industry until he retired for good to St. Augustine in 2007. For many years he continued to serve by supporting various community initiatives through the Military Officers Association and local elected office among others. Ronnie was an active father, coaching his children's sports teams, helping out with homework, attending father/daughter dances, and instilling love of country in their hearts. His work ethic was legendary, his rigor for perfection was limitless, and his sharp reasoning skills buoyed his work and wit. He put family and country above all else, and he was known for always doing the right thing regardless of consequence. While he was a serious man, his personal joys included listening to Johnny Cash, golfing with friends, and enjoying a good laugh – he was known to laugh so hard he could not speak for several minutes. He is survived by his wife, Nancy, his brother, James Radford, his children, Joel Radford (Robin), Laura Radford, and Gina Mangus (Charles), his grandchildren, Brandi Moore (Andy), Browdie Wylie, Lindsay McLean (Justin), Zachary Mclean (Hannah), Nicholas Mangus, Brock Radford and Bradyn Radford, Elena Mangus, and his great grandchildren Browdie, Anna, and James. Due to COVID considerations, private services will be held at Craig Funeral Home Monday February 1, 2021 at 11 AM ET, and virtual participation will be supported at the link below https://www.oneroomstreaming.com/view/authorise.php?k=161177722797591 The military portion of the service can be seen at the link below. https://www.oneroomstreaming.com/view/authorise.php?k=161247812899163 For additional details please visit their website at https://www.craigfuneralhome.com. In lieu of flowers, the family prefers donations to be made in Ronnie Reginald Radford's honor to The Wounded Warrior Project (https://www.woundedwarriorproject.org).

The family of Ronnie R. Radford created this Life Tributes page to make it easy to share your memories.

Send flowers to the Radford family.