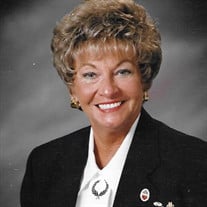 Sally Kay Jackson-Thornton May 25, 1939 – May 25, 2021 Sally Kay Thornton died peacefully in her sleep May 25th on her 82nd birthday in Jacksonville, FL. Born in 1939 in Appleton, Missouri, she was raised in Raytown, MO and graduated with the Raytown High class of 1957. Most people knew Sally for her wonderful soprano voice and love of music. Even until her last days, she was singing to caretakers and family members. She is predeceased by her loving parents, William Allen & Kathryn Leah Matthews-Jackson of Raytown Missouri and brother, Richard “Dick” Jackson (Lawson, MO) and ex-husband, David Lee Thornton (Santa Barbara, CA). Living relatives include her sister, Sharon Jackson-Ensminger of Kansas City, MO; her 4 children: Kristine Kay Thornton-Kelly (St. Augustine, FL), Sharlyn Thornton Vande Beek (Studio City, CA), David Eric Thornton (Nashville, TN), Jodie Thornton-Belz (Studio City, CA) and six grandchildren: Kyle Lea Vande Beek-Tabor, Micah Zachary Thornton, John Everett “Jack” Vande Beek, Allison Elizabeth “Allie” Kelly, Brenden Paul & Rachel Grace Thornton. She met her husband, David, in the University Chorus at the University of Colorado in Boulder. They married in 1959. Sally supported him through his college and dental school years working as a secretary in Kansas City MO. David entered the Air Force leading to perhaps her favorite two years spent in Guam where he was stationed in 1968-69. Having some free time, she took up golf and was a member of Officers Wives club and directed church choirs at both the Protestant and Catholic churches on Anderson Air Force Base. Following his time in the Air Force, they moved to Goleta, CA where Sally worked as his receptionist/bookkeeper in his dental practice for many years. While there, she directed the El Camino Orthodox Presbyterian Church choir for 10 years where she made many wonderful friends and memories. In the 1980’s, they moved to Santa Barbara, she attended and sang in the First Presbyterian and El Montecito Presbyterian choirs and sang with the Santa Barbara Choral Society. At this time, she enjoyed working as the Activities Director at Sanmarkand Retirement Community in Santa Barbara. In 1991, at age 52, she decided to make a career change and became a flight attendant for American Airlines. She loved that job and would still be doing it if she could. She moved to Texas and flew out of Dallas Fort Worth. She went on to become a flight attendant instructor and was appreciated for her humor and the silly songs she sang to help students relieve stress. She retired from American Airlines in 2008 and enjoyed her life in Granbury, TX with her wonderful companion, Tippy the Maltese puppy. Having time to sing again, she joined the Granbury Civic Chorus & church choirs in the area and sang and then directed the Melody Belles of Granbury, which brought her much joy and where she made good friends. In 2018 she felt it was time to live closer to family and relocated to Westminster Woods on Julington Creek in Jacksonville, FL. She and Tippy loved to walk the lovely campus and she was known for her brisk pace. She continued to sing with WWJC Choir for Sunday Vespers and while she could still drive, she loved singing with the Geneva Presbyterian Chancel Choir where she was a member. A final highlight was when she sang the National Anthem for the WWJC 2019 Talent show and hit the high B flat flawlessly! Dementia set in significantly during her last year of life and the Covid pandemic did not help. A memorial service will be held at Geneva Presbyterian Church on Sat. June 26th at 3pm and she will be interred at the Santa Barbara Cemetery at a later date.

The family of Sally Kay Jackson-Thornton created this Life Tributes page to make it easy to share your memories.

Send flowers to the Jackson-Thornton family.