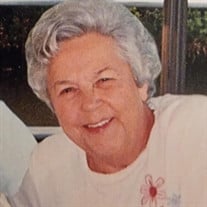 Sally Ann Szarmack, passed away on July 31, 2021 in the Hospice unit at Baptist South Medical Center in Jacksonville, Florida. Sally was one of four children born to John and Viola Reynolds in Pittsburgh, PA. At the age of 20 Sally met and married the love of her life John Kordeleski. Tragically, two years later, John, a fighter pilot in the United States Navy, was shot down and killed in the line of duty over the Pacific during the Korean Conflict. As a young mother, a widow and a beautiful woman both inside and out, Sally went to work as a model and a flight attendant. Her need to provide a stable home environment for herself and her son Dale led Sally to enroll in the University of Boise, where she earned a BS in Nursing. Following graduation Sally returned to her childhood home, Pittsburgh. While working in the ER unit of a Pittsburgh hospital Sally met Joe Szarmack, a police officer who would often bring patients into the ER. They were married in 1965 and had a daughter, Christine. After their children had left home, they chose to move to Jacksonville to be closer to Dale and their grandchildren. From the time she was a young girl, Sally was a caregiver, helping her mother with the care of her live in uncle, to the countless number of patients she cared for throughout her 35+ year nursing career, to her many friends, her granddaughters and her sister Colleen. Even while living at Brookdale Assisted Living and dealing with severe chronic pain herself Sally could often be found helping another resident. A lifelong Catholic, Sally's faith sustained her throughout the many painful times in her life and it continued to deepen and grow throughout her entire life. While attending St. Josephs Catholic Church in Jacksonville, Sally participated in the Christ Renews His Parish Ministry for many years as well as a weekly women's Bible Study and the Merry Widows, following Joe's passing in 1997.Sally brought her delightful smile, her twinkling eyes, her listening ear and compassionate and caring heart wherever she went. She is survived by her son, Dale Szarmack; daughter, Christine Watts and Lennox; brother, Ned Reynolds and Shirley; grandchildren, David Dale Szarmack, Michael Adam Szarmack, Jammie Suzanne Szarmack Morton , Erica Ann Traverso, Robyn Jean Morton and Sara Michele Morton; 12 great- grandchildren; nieces, Jeannie Hayden and Sally Beth Reising. Her husband Joe, sister Coleen, and brother Robert, preceded her in death. A memorial mass will be celebrated at 10:am on Friday, August 27th at the St. Josephs Historic Catholic Church followed by inurnment at the church cemetery.

Sally Ann Szarmack, passed away on July 31, 2021 in the Hospice unit at Baptist South Medical Center in Jacksonville, Florida. Sally was one of four children born to John and Viola Reynolds in Pittsburgh, PA. At the age of 20 Sally met and... View Obituary & Service Information

The family of Sally Ann Szarmack created this Life Tributes page to make it easy to share your memories.

Send flowers to the Szarmack family.