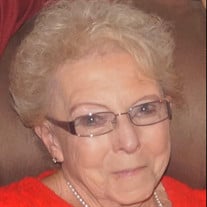 Shirley Elizabeth Macdonald of St. Augustine died on Aug. 23, 2021. She was 93 years old. She epitomized the role of being a Navy wife keeping her home full of love and happiness during her husband, Kevin’s, frequent deployments. Shirley and Kevin grew up together in the small village of Ceres. A state line but hardly a mile separated them. Shirley lived on the Pennsylvania side, Kevin in New York. They worked together for a time at Kevin’s father’s store, Ceres Service. The two squabbled and teased each other constantly. It served as a prelude to them falling in love. She worked much of her life as a hairstylist turning many customers into lifelong friends. Her skills are captured in countless wedding and prom photos. She laughed when customers shared good times. She offered a concerned ear when they confided sadness. Friends will remember Shirley for her stylish fashion sense and for her compassion and concern for others. No sisters were ever closer. Dolores and Barbara were her closest friends. Their husbands all knew each other before becoming related by marriage. Throughout their lives they visited each other’s homes frequently and also vacationed together. Shirley was a woman of many talents. She sewed, decorated cakes and painted landscapes. Her chocolate chip cookies were world class. She may not have known all the strategy involved, but she was an avid Jaguar fan. She was quick to “bet you a nickel” to stress her certainty of an opinion. As a mother she was warm and giving making sure her children understood manners. Her’s was a quiet discipline. With a single glance she could stop mischief from 100 paces away. Shirley and Kevin enjoyed a second honeymoon of sorts one summer when Kevin was deployed to Rota, Spain. She quickly took to the culture, meeting new people and experiencing the country. While she enjoyed their time away, she insisted on phoning her children long distance to hear their voices. She was a proud grandmother. She doted on them as toddlers, was careful not to spoil them as teens and bragged on them and their accomplishments when they became young adults. Shirley stayed fit through her retirement years with daily 3-mile walks along the beach. It was a quiet time that allowed for prayer and reflection. She also visited the Flagler Wellness Center three days a week. Staff often had to remind her to slow her pace on the treadmill. It was advice she rarely heeded. Never a woman to reveal her age, that changed when she turned 80 and people commented on her youthful appearance. She’d burst into a smile when she revealed that she was much older than people first thought.Like her mother before her, even in her last days, there wasn’t a wrinkle to be found. Shirley, the daughter of Leighton and Wilma Mix, was born in Smethport, Pennsylvania on December 11 1927. She graduated from Shinglehouse High School and the International Beauty School of Buffalo. She was preceded in death by her parents as well as her beloved sister Dolores Monroe (Donald). She is survived by her loving and devoted husband of 64 years, Kevin; her dear sister Barbara Splain (Thomas); son, Dan (Judy); daughters, Barbara Brown (Robert) and Diane Mutchie (Bill); her grandchildren, Aaron Brown, Leighton Brown (Amber), Heather Mutchie and Luke Mutchie, great grandchildren, Madison Smith and Kyle Brown; and several nieces and nephews. A memorial Mass will be held 11 a.m. on Sept. 15 at San Sebastian Catholic Church, 1112 SR 16, St. Augustine. In lieu of flowers the family suggests donations to Catholic Charities or The Salvation Army. Please visit the online tribute at Craig Funeral Home at www.craigfuneralhome.com.

Shirley Elizabeth Macdonald of St. Augustine died on Aug. 23, 2021. She was 93 years old. She epitomized the role of being a Navy wife keeping her home full of love and happiness during her husband, Kevin&#8217;s, frequent deployments. Shirley... View Obituary & Service Information

The family of Shirley Elizabeth Macdonald created this Life Tributes page to make it easy to share your memories.

Send flowers to the Macdonald family.