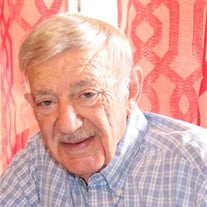 Silvio DiMarco, 88, a longtime resident of St. Augustine, Florida, went to be with the Lord on Friday, April 19, 2019. He was born in Brooklyn, New York on May 1, 1930 to Luigi and Maria (n. Luca) DiMarco. As a young man, Silvio spent several years serving our country in the United States Navy. Throughout his adult life, Silvio worked hard and built a beautiful life for the family he loved so dearly. In 1988, he then moved to Florida, where he enjoyed his retirement years. Even in his retirement, Silvio was always active, healthy, and on the go. He is survived by Pauline (n. Nuara) DiMarco, his loving wife of 68 years. He also leaves behind his faithful and devoted daughter Lorraine (n. DiMarco) Abbuhl and her husband Timothy. In addition, Silvio is survived by a number of beloved grandchildren and greatgrandchildren; his grandson Phillip DiMarco, his wife Autumn, and their children Phillip, Dominic, and Isabella; his granddaughter Michelle DiMarco; his granddaughter Melissa (n. DiMarco) Shute, her husband James, and their children Mason, Cameron, and Emmy; his granddaughter Elizabeth DiMarco; his granddaughter Lena (n. Nanasy) Hull and her husband Joshua; his granddaughter Laura (n. Nanasy) Harris, her husband Andrew, and their children Layla and Parker; and his granddaughter Rachel Abbuhl. Silvio also leaves behind Michael Nanasy, a close family friend. Funeral arrangements are being conducted by Craig Funeral Home in St. Augustine, Florida. Visiting hours will be held Tuesday, April 23rd from 5-7 p.m at Craig Funeral Home. The funeral service will be held on Wednesday, April 24th at 10:30 a.m. at Craig Funeral Home with the interment to follow immediately after at San Lorenzo Cemetery. The family will gratefully accept flowers, or in lieu of flowers, donations may be made in Silvio’s honor to the St. Jude Children’s Research Hospital. (www.stjude.org)

Silvio DiMarco, 88, a longtime resident of St. Augustine, Florida, went to be with the Lord on Friday, April 19, 2019. He was born in Brooklyn, New York on May 1, 1930 to Luigi and Maria (n. Luca) DiMarco. As a young man, Silvio spent several... View Obituary & Service Information

The family of Silvio DiMarco created this Life Tributes page to make it easy to share your memories.

Send flowers to the DiMarco family.