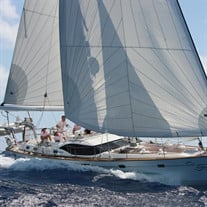 Steve F. Harrill, passed away at Orange Park Medical Center on June 2, 2019 at the age of 81. Steve’s love of the ocean began while he was young, growing up in Carolina Beach, NC. He spent many years in South Florida until following Hurricane Andrew in 1992, when he relocated to Jacksonville. He has happily called St. Augustine home since 2007. Living near the water a majority of his life led Steve into a long and varied career in the Marine Industry. Captain Steve’s greatest joy was chartering his 57 ft sailboat named Tangaroa many times from Miami to the Bahamas. Steve married the love of his life Audrey on Tangaroa in Miami’s Biscayne Bay, October 21, 1989. When not on the water Steve liked to work with his hands, especially in the form of woodworking, and personally contracting the construction of both their homes in St. Augustine and in Bouquet, Panama. Mr. Harrill thoroughly enjoyed most recently tending and managing, their 2 ½ acre coffee farm & Panamanian home, “Flight of Fancy”. He was definitely an all or nothing man dedicated and passionate about his country, the environment, and animals, particularly Akita’s, of which he owned three, Odin, Kajin and Beignet. Steve volunteered as a transporter for Jacksonville Akita Rescue for several years. Steve is survived by his wife Audrey of nearly 30 years; son, Randy (Christine) Harrill; step daughter, Jessica (David) Stewart; brother, Philip (Anne) Harrill; sister, Harriet Nauheimer; grandchildren, Nancy Evans, Alex (Kristina) Harrill, Mary-Margaret Harrill, Zachary Harrill, David (Katie) Stewart, Jr., Steven Stewart, Heather (Adam) Napper, Jason (Rebecca) Stewart; 8 great-granddaughters; 4 nieces. His daughter Vivian Harrill preceded him in death. A memorial service will be held on Wednesday, June 12 at 2:00pm at Craig Funeral Home .Friends are invited to gather from 1-2pm. In lieu of flowers please consider a memorial donation to the Akita Rescue Society of Florida.

Steve F. Harrill, passed away at Orange Park Medical Center on June 2, 2019 at the age of 81. Steve&#8217;s love of the ocean began while he was young, growing up in Carolina Beach, NC. He spent many years in South Florida until following Hurricane... View Obituary & Service Information

The family of Steve Francis Harrill created this Life Tributes page to make it easy to share your memories.

Send flowers to the Harrill family.