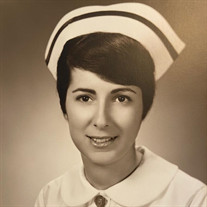 Susan “Suzy” Pugliese Colvin passed away at the age of 77 on Sunday, December 13, 2020, in Saint Augustine, Florida. She was born on January 5, 1943, in Pittsburgh, PA to her parents, Peter and Guida Pugliese, and was raised, along with her sister, Francine, in Vandergrift, PA. On June 27, 1970, she married the love of her life, Gerald (Jerry) Colvin. They had 50 happy years together and had three children. In 2003 they relocated to St Augustine Beach, FL. Suzy loved spending time on the beach with her friends and family. Her passion for caring for people led her to pursue a career in nursing. She received a Bachelor’s of Science in Nursing from Duquesne University and a Master’s of Science in Nursing from the University of Pittsburgh. She was dedicated to the profession and after years of pediatric nursing practice, returned to Duquesne to teach nursing. Her devotion to her students and knowledge sharing led to her involvement with a Nicaraguan nursing cultural exchange program. Her participation in the mission spanned several years, during which she helped to improve the health of the members of the families with which she worked directly. She also collaborated with colleagues to improve sanitation and the quality of the lives of residents of the barrios in Managua, the capital city of Nicaragua. After moving to Florida, she refocused her compassion as a nurse to the students of the Florida School for the Deaf and Blind. Suzy was an avid runner, rower, practiced yoga, and attended fitness classes at the YMCA. She volunteered her time at the Saint Augustine Women’s Exchange and the Whitney Laboratory for Marine Bioscience. Suzy and Jerry loved to travel and visited Italy, Greece, and Ireland over the years. She loved having a house full of family and spending time with her grandchildren. Many happy Thanksgivings were spent running on the beach playing with her grandchildren followed by meals around the table. She is survived by her husband Gerald Colvin, her sister Francine (Rick) Anstey, her children Michael Colvin, David (Caroline) Colvin, and Annie (Andrew) Bolton. Suzy also leaves behind her adored grandchildren Peter, Ava and Preston Colvin, Cassidy and Sierra Colvin, Cameron and Wesley Bolton. There are currently no plans for a service and in place of flowers, the family is asking that people consider donating to these organizations that were meaningful to Suzy: Saint John’s County Council on Aging: www.coasjc.org/donate, 180 Marine St., St. Augustine, FL, 32084 Duquesne University School of Nursing: Robert J. and Velia P. Vota Student Resource Fund, 600 Forbes Avenue, 406 Administration Building, Pittsburgh, PA 15282

The family of Susan Pugliese Colvin created this Life Tributes page to make it easy to share your memories.

Susan “Suzy” Pugliese Colvin passed away at the age of 77 on...

Send flowers to the Colvin family.