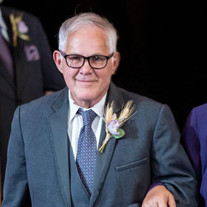 Thomas Joseph Argalas, 74, Jacksonville FL passed away peacefully at home on June 2, 2021, surrounded by his loving family. He was born on May 28, 1947, in Burbank California. His family moved from New Jersey to Jacksonville in 1955. Tom and his wife Lola were married in 1978 and were blessed with two daughters. He retired from Prudential Insurance, where he worked for 28 years. Tom was actively involved at St Joseph’s Catholic Church for over 40 years. He served in various ministries over the years but most recently he was involved in the Knights of Columbus, Men’s Club, and numerous Bible Studies. Those who knew Tom know of his strong faith and love of God. One of his passions was supporting the unborn and those who were under served. Tom’s love for his family was seen throughout his life. He was a fixture at all his daughters’ events as they grew up. He was known as Mr. Tom to all their friends. He was a kind and loving husband and a mentor to many. He is survived by his loving wife, Lola, of almost 43 years and two daughters, Karen Arn (Fred Arn) and Kristen Argalas (Chad Carson). Tom had three grandsons: Ace Arn, Aiden Arn, and Tam Carson. He is also survived by a brother John Argalas, two sisters: Jeanne Mullaney and Mary Archer, and numerous nieces and nephews. Tom is preceded in death by his parents, Steve and Barbara Argalas, and his brothers, Steve and Barry Argalas. A Mass of Christian Burial will be celebrated to honor Tom’s life at St Joseph’s Catholic Church at 11757 Old St. Augustine Road with Fr. Briggs Hurley as Celebrant on Tuesday, June 15, 2021 at 2:00 p.m., Rosary will be prayed at 1:30PM. Reception will follow at the Cody center. In lieu of flowers please send memorial donations to Divine Mercy House, 4118 Loretto Road, Jacksonville, FL 32223 or Mandarin Food Bank, 11730 Old St Augustine Road, Jacksonville, FL 32223.

Thomas Joseph Argalas, 74, Jacksonville FL passed away peacefully at home on June 2, 2021, surrounded by his loving family. He was born on May 28, 1947, in Burbank California. His family moved from New Jersey to Jacksonville in 1955. Tom and... View Obituary & Service Information

The family of Thomas Joseph Argalas created this Life Tributes page to make it easy to share your memories.

Send flowers to the Argalas family.