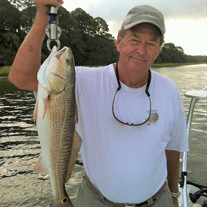 Thomas Rhea Casteel (Tommy) passed away December 2, 2021, with his family by his side. He was born June 17, 1941, in Marion, VA; to the late John Rhea Casteel and Mabel Patterson Casteel, who along with his sister, Rosalind Casteel Barnes, preceded him in death. Tommy graduated from Marion High School, then East Tennessee State University, where he was a proud member of the Pi Kappa Alpha Fraternity. Upon graduation, Tommy moved to Richmond, Virginia where he spent the next 10 years teaching at Highland Springs High School while coaching the Cross Country and Golf teams. With a young, growing family, he decided to enter the business world, settling in Rocky Mount, Virginia; where in 1977, he co-founded Rocky Top Wood Preservers. Ever the consummate “people person”, Tommy served as the President of Rocky Top until his retirement in 2001, during which time the company would grow to become one of the largest pressure treated lumber producers in the nation. In 2001, Tom relocated to Ponte Vedra Beach, Florida and married Joy Montgomery of Ponte Vedra Beach, Florida. He and Joy enjoyed an active life full of good friends and family. Tommy was the life of the party and never met a stranger. He especially loved playing golf, boating, fishing, snow skiing, and traveling. He’ll be lovingly remembered and missed by all who knew him. Tom was blessed with a large and loving family. He is survived by his wife Joy Montgomery Casteel; daughter Van Daniel (Tyson); sons John Casteel (Michelle) and Briggs Casteel (Jennifer); stepchildren, March Powell (Tim) and Chad Montgomery (Amy); grandchildren (to whom he was affectionately known as “Papa Tom”), Luke Daniel, George and Henry Casteel, Samuel and Anne Brailsford Casteel, Jack and Seth Powell, Ethan Byal, and Skye Montgomery. The family will gather for a memorial service on Saturday, February 5th and a celebration of life with friends and family will follow that afternoon at the Serenata Beach Club.

Thomas Rhea Casteel (Tommy) passed away December 2, 2021, with his family by his side. He was born June 17, 1941, in Marion, VA; to the late John Rhea Casteel and Mabel Patterson Casteel, who along with his sister, Rosalind Casteel Barnes,... View Obituary & Service Information

The family of Thomas Rhea "Tommy" Casteel created this Life Tributes page to make it easy to share your memories.

Send flowers to the Casteel family.