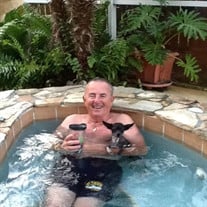 In memory of Tom LoCasale, 77, loving husband/father/brother/uncle/grandfather/friend, who passed away peacefully at home on July 12th, 2020. He is survived by Barbara, his wife of 57 years, daughters Kim (Bruce), Dawn (Joe) and Jennifer (David), sister Judy (John) and grandchildren Morgen, Jordyn, Madison and Brooke. He also is survived by a large extended family, including Cathy, Jack, Brenda, Sue, Bill, Tony, DJ, Aaron, Candy, Mickey, Tracy, Heather, Delaney, Jesse, and all their loving partners and children. While we could fill the page with his many accomplishments, we keep coming back to the wisdom and kind-heartedness he taught us by example as a way to sum up his impactful life. At any age, in any situation, the question would arise - what would he do? So, in honor of his legacy and the desire to pass on his lessons, we are sharing some here. He loved his family fiercely. Examples here could go on forever. Some of the top stand outs include arranging a family rescue from another country and finding a way to officiate his daughter’s wedding at the late stage of his illness. In fact, he officiated multiple family weddings as well as walking many of us down the aisle. He never let another person down. He fulfilled every obligation he ever undertook - his word was his bond. He enjoyed the good things in life including travel, food and wine, and friends and family. When they were combined together, they were even better. Special memories are numerous, but RV trips across the country and hiking the Grand Canyon with his grandchildren rank among the top. He was an icon in the Jacksonville insurance industry. He was a genuine gentleman as well as a knowledgeable and highly respected insurance professional. He never made an enemy. He was always kind and ensured everyone was included. Even if it had been awhile, the relationship picked up like that of an old friend you can tell anything to. But, if you hurt someone he loved, you needed to be prepared for his wrath. He modeled how to put others before self and showed generosity with his spirit and his money. He loved to work hard to make money and enjoyed finding new and creative ways to spend it. His playfulness left a mark on everyone. From the tickle attacks that lasted until you cried laughing, the face licks or toe bites when you were not expecting it or play boxing with the big red gloves (where he would let the grandkids win). He was self-made and self-reliant. He engaged with the world with the confidence and humility to learn from it and make the most of the knowledge gained. He always had time to talk with you. He treated everyone like he was genuinely interested in their life. He would look you in the eye and ask how you were doing, how your family was and what was new in your life. And, he then wanted to hear your story. He loved a good joke, but his humor was never mean spirited. His laughter, including his willingness to laugh at himself, was a trademark of his good nature. He relished in making sure everyone was having a good time. In his role as big brother, he was super thoughtful and did not stop showing his love even during his last year of struggle. He had a keen sense that life was becoming very short, so he made each minute special. I will treasure his phone calls just to check up on me, that he never minded playing golf with his sister and he even had me going to see war movies that I learned to enjoy. So many times we would share memories of our parents over our lunches when he was sneaking the burgers and fries from Barb. He will be sorely missed by anyone who knew him. He also served as a brother from another mother. Some highlighted reflections in that role include sneaking into the duplex, swimming naked in the pool, lending money to buy furniture for the first home, eating the chicken cacciatore that wasn’t, having the hurricane party at the tiny house, drinking snow bears, and the 60th birthday party camping in motor homes. His parting gift included providing all the organization and supports necessary to allow him to be home and surrounded by his family for his passing. We like to think he loved hearing all the story telling and overflowing love and memories in his honor. Your life well lived will continue to serve as the example for us all. We love you. There are no plans for a public service at this time due to the current Covid-19 situation. These are our stories and memories and we would love if you would write your memories and stories of him on the tribute wall page. In lieu of flowers, donations can be made to Community Hospice (www.communityhospice.com/) or Alzheimer’s Association (https://alz.org/).

In memory of Tom LoCasale, 77, loving husband/father/brother/uncle/grandfather/friend, who passed away peacefully at home on July 12th, 2020. He is survived by Barbara, his wife of 57 years, daughters Kim (Bruce), Dawn (Joe) and Jennifer (David),... View Obituary & Service Information

The family of Thomas LoCasale created this Life Tributes page to make it easy to share your memories.

Send flowers to the LoCasale family.