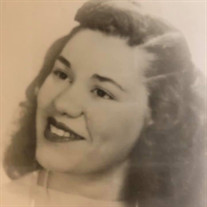 Virginia Conlin, 93, a long-time resident of St. Augustine passed away peacefully at home on August 11, 2019, surrounded by her loving family. She was born in Worcester, MA, daughter of Frederick and Frances (Maglione) Riley. She is predeceased by her husband of 51 years, John P. Conlin, whom she married at St. Stephen's Church in Worcester and lived for many years in Grafton, MA before moving to St. Augustine. Virginia was a Realtor in Grafton, where she and her husband owned and operated Conlin Realtors, and after moving to St. Augustine, she worked for Watson Realty, Century 21 St. Augustine Properties, and Deltona Corporation. After retiring from real estate, she was a fixture for many years, working in her son's pet store, Pet World in St. Augustine where she greeted everyone with her warm smile. Above all things, Virginia was a mother to her five children who were her happiness. She leaves three daughters, Mary Conlin Shaw (Joe) of Gainesville, FL, Ann Conlin (Gary Andriotakis) of Tewksbury, MA, Teresa "Terry" Conlin of St. Augustine and two sons, Paul Conlin (Sharon) of St. Augustine and Daniel "Danny" Conlin, also of St. Augustine. She is predeceased by her son, John "Jackie". She also leaves two grandsons, Andrew (Winnie Gier) of Providence, RI and Joseph of Savannah, GA and a brother, Francis Riley (Patricia) of Worcester, MA, along with several nieces and nephews. She was predeceased by her brother, James Riley of Worcester, MA and two sisters, Eileen Riley of Worcester, MA and Eleanor Hutchinson of Amherst, MA. She had a feisty personality and prided herself in her ability to do everything on her own and lived by herself until just months before her death. She was happiest at home when her house was filled with the laughter of her family surrounding the dining room table. She was the most wonderful mother to her children who will carry her love in their hearts forever. A visitation will be held on Friday, August 16, 2019 from 5:00 to 8:00 PM. A funeral mass will be held at Corpus Christi Catholic Church in St. Augustine on Saturday, August 17, 2019 at 11:00 AM with interment following at San Lorenzo Cemetery in St. Augustine. Because of Virginia's love of children, in lieu of flowers, memorial donations may be made to St. Jude's Research Hospital.

Virginia Conlin, 93, a long-time resident of St. Augustine passed away peacefully at home on August 11, 2019, surrounded by her loving family. She was born in Worcester, MA, daughter of Frederick and Frances (Maglione) Riley. She is predeceased... View Obituary & Service Information

The family of Virginia Conlin created this Life Tributes page to make it easy to share your memories.

Send flowers to the Conlin family.