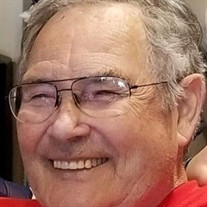 Walter James Lata (age 86) passed away on March 7, 2022 surrounded by family. Born in Manhattan, N.Y. to parents Walter B Lata and Beatrice Monchinski on May 14, 1935, he was the older of two sons. The family moved to Budd Lake, N.J. in 1947 where he completed his education. Walter served in the U.S. Army beginning on September 2, 1959, and was stationed in Korea due to the Korean War. He was a decorated Marksman (rifle). Upon returning from Korea, he worked for companies such as Mineral Wool, Casio Watch Co, Tiffany’s, and Rovac. Later, Walter worked many years for the O’mealia Outdoor Advertising Company as a billboard sign painter. He enjoyed fishing, bingo, and playing an occasional slot machine. As an avid football fan, his favorite team was the N.Y. Giants, and if he could help it, he never missed a game. Walter was hard-working, kind-hearted and an animal lover. With seven children, he didn’t have time for very many traditional hobbies, but he loved to rescue animals such as dogs, cats, raccoons, skunks, flying squirrels, baby deer (fawns), birds, and other creatures. He also rescued and provided shelter for many different kinds of primates, such as: Capuchin, Woolly, Baboon, and Spider monkeys. Walter would help anyone in need and many times, he opened his home to those who needed help along the way. Walter loved his family and was a devoted husband and father. Family time was important and he loved playing cards and board games with his family. Walter enjoyed going out to eat and to experience the small towns nearby. The family would meet for lunch or dinner, visit, and then check out the local downtown area. In his earlier years, he loved to search and dig for antique bottles, and at one time, he had quite a collection. He also took the family to oldies concerts to see performers like Chubby Checker, The Platters, The Temptations, and The Shirelles. Walter always enjoyed listening to the oldies music of the 50’s and 60’s, and he would sit in the living room and sing along, tapping his fingers to the music. His absolute favorite was Elvis Presley. Upon retirement, Walter relocated to St. Augustine, Florida with his wife of 51 years, Theresa Lata. Although Theresa preceded him in death in 2015, he leaves behind a large family, and he will be greatly missed. Brother: Edward Lata of Budd Lake, NJ. Four sons: Walter Lata of Budd Lake, NJ, George Lata of Reeders, PA, Stanley Lata and Paul Kisner of St. Augustine, FL. Three daughters: Kimberly Gladding of Wind Gap, PA, Christine Gedinsky of Staten Island, N.Y, and Mary Lynn Kisner of Orlando, FL. Seven granddaughters: Jennifer Smith, Heather Lata, Rebecca Lata, Holly Andrewsh, Crystal Shaw, Amanda Nyborg, and Kacey Gedinsky. Three grandsons: James Lata, John Lata, and Chris Fargnoli. Four great granddaughters: Caitlyn Shaw, Autumn Shaw, Jillian Shaw, and Charlotte Nyborg. One great great granddaughter: Hayleigh Jackson. One niece: Denise Cairo. Two nephews: Edward Lata Jr and Michael Lata, and several great nieces and nephews and family members and friends. Services will be held at 2 pm on Friday, April 1, 2022, at Craig Funeral Home on 1475 Old Dixie Highway, St. Augustine, Florida. Flowers are gratefully accepted. Condolences may be offered at www.CraigFuneralHome.com.

Walter James Lata (age 86) passed away on March 7, 2022 surrounded by family. Born in Manhattan, N.Y. to parents Walter B Lata and Beatrice Monchinski on May 14, 1935, he was the older of two sons. The family moved to Budd Lake, N.J. in 1947... View Obituary & Service Information

The family of Walter James Lata created this Life Tributes page to make it easy to share your memories.

Send flowers to the Lata family.