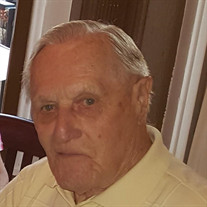 Walter J. Nullet, He was born in 1929 in Sunnyside, Queens, a neighborhood in Woodside, New York. He lost his Father, Walter P. Nullet in a tragic accident in 1940. He and his mother then moved upstate to Cairo, NY for a few years until they... View Obituary & Service Information

The family of Walter J Nullet created this Life Tributes page to make it easy to share your memories.

Send flowers to the Nullet family.