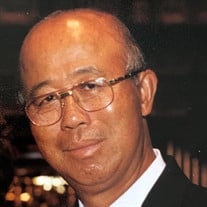 On Friday, April 30, 2021, Dr. Wen I Lin, loving husband and father of three children, passed away at the age of 78. His death occurred unexpectedly. Wen was born on October 10, 1942 in Taiwan and is survived by his beloved wife of 51 years, Yaling; his daughter, Judy Lin Bristow and husband, Charles Reginald Bristow of Richmond, Virginia; his son, Franklin John Lin and wife, Annesia Marie Lin of Marietta, Georgia; his daughter, Christine Lin Barraud and husband, Benjamin Barraud of Wellington, New Zealand; and seven grandchildren – his greatest pride and joy – Kobe Bristow (16), Jett Bristow (14), Nomi Barraud (14), Theo Barraud (13), Graye Lin (9), Jock Bristow (8) and Troy Lin (7). Wen is the son of the late Dr. Yen and Shin-Yen Lin. He was the youngest of seven children and is survived by two brothers and two sisters who live in Taiwan. In Taiwan, Wen pursued a career in medicine, having graduated in 1968 from Kaohsiung Medical College where he also completed his urological residency. He married Yaling in 1969 and together with his wife and Judy, immigrated in 1973 to the U.S. He then completed further urological training at Ohio State University. Ultimately, he settled in St. Augustine, Florida, where he practiced for nearly 40 years. He was a personable, well-respected, and sought-after physician. In 2002, he helped Flagler Hospital become the first hospital in the State of Florida to use a novel laser technique for the treatment of prostate disease. He attracted medical tourists from around the country and even around the world. At that time, only seven other hospitals in the U.S. were offering the new laser procedure. Mid-way through his career, Wen became an avid golfer. His enthusiasm for golf was fueled by a unique passion and prowess for hunting lost golf balls. In fact, the net ball count often became the true score to track after each round. Wen eventually traded his golf clubs for fishing rods, spending endless hours in his own backyard fishing along the beautiful intracoastal waterway. Fishing became the prime passion that he shared with his grandchildren. Wen also rekindled a childhood passion by raising pigeons - like the championship homing pigeons he raised in Taiwan as a boy. During retirement years, Wen and Yaling enjoyed much of their time on the road visiting family and also traveling to casino resorts in Biloxi, Mississippi, where Wen found opportunities to fish in the gulf coast. They celebrated their 50th anniversary with a cruise to Australia and New Zealand. To keep his mind sharp, he took up and eventually became obsessed with Sudoku. Wen achieved the Grand Master level this past year - an achievement he boasted to his grandchildren. Wen perhaps will be most remembered as a beloved grandfather "Ah-Gong", whose antics caused endless hours of laughter and bellyaches among his grandchildren. In their presence, he would revert, or perhaps even regress, into childhood. Competition for arcades tickets was always fierce. His stash of silly wigs and his disjointed dancing were huge hits. There was no doubt he was a natural for this role, being so young at heart. Wen proceeded throughout life with temperance and calm. He enjoyed life’s simple pleasures. He was generous to a fault. His strong, quiet, yet steady support will be missed most. The family will receive friends on Saturday, May 8 at Craig Funeral Home in St. Augustine from 2:30 – 5:30 p.m. with the funeral service at 4:00 p.m. The family will receive friends again on Saturday, May 15 in the Bristow-Faulkner Chapel at Faulkner Funeral Home in Saluda, Virginia with a burial service to follow in a family cemetery. In lieu of flowers, the family welcomes contributions in remembrance of Wen I Lin to Flagler Hospital c/o Flagler Health Care Foundation, PO Box 860216, St. Augustine, FL 32086.

On Friday, April 30, 2021, Dr. Wen I Lin, loving husband and father of three children, passed away at the age of 78. His death occurred unexpectedly. Wen was born on October 10, 1942 in Taiwan and is survived by his beloved wife of 51 years,... View Obituary & Service Information

The family of Dr. Wen I Lin MD created this Life Tributes page to make it easy to share your memories.

Send flowers to the Lin family.