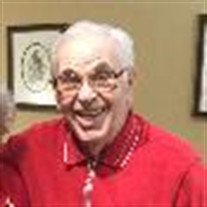 Willard (Will) Lewis, 92, born November 15, 1927 passed away peacefully on April 9, 2020 with his beloved wife, Connie, by his side after a lengthy illness in St. Augustine, FL. He was one of 13 children born in Rockland, MA who grew up during the depression. He served in the Navy aboard aircraft carriers during WWII. Will worked for Publix in St. Augustine for 32 years. He leaves behind his sister Sally Brunke of Rockland, MA, brother Bobby Lewis of Lakeland, FL, and his brother in law and sister in law John and Randy Allegra of Melbourne, FL. Will had many nieces and nephews, some of whom he was very fond, including Ann Powers and Joey and Donald Fucile of MA, Michael Allegra of Utah and Mary Franco of CT who provided her magic so that Will and Connie could be together for his last few weeks. Special grand nieces and nephews included Susan Fultz and her husband Billy, and Barbara Powers, all of MA. Will had a bond with Bailey Bronner who held a special place in his heart. He also leaves behind his dear friend Dana Birch. Will and Connie married in 1955 and lived in S. Weymouth, MA for 42 years before settling in St. Augustine, FL. Married for 64 years, Will and Connie had a great love story, traveling together even to Hawaii to play golf. Although they had no children “Uncle Willy” was loved by his nieces and nephews to whom he was funny, always had a great big smile and a zest for life. He was always willing to share a bowl of ice cream and a great story. He loved sports, Will played softball and was an avid bowler, pool player and golfer. At the top of their games Will and Connie were Husband and Wife Massachusetts State Golf Champions. Will was a kind and sweet man, loved by everyone who knew him. He will be missed. A celebration of life will be held at a later date. In lieu of flowers please make a donation in Will’s memory to support the heroic efforts of the caregivers and health care workers in your community who are working so hard to keep seniors safe and healthy. Will would like that. Craig Funeral Home, Crematory and Memorial Park (www.craigfuneralhome.com) is in charge of arrangements.

Willard (Will) Lewis, 92, born November 15, 1927 passed away peacefully on April 9, 2020 with his beloved wife, Connie, by his side after a lengthy illness in St. Augustine, FL. He was one of 13 children born in Rockland, MA who grew up during... View Obituary & Service Information

The family of Willard (Will) Lewis created this Life Tributes page to make it easy to share your memories.

Send flowers to the Lewis family.