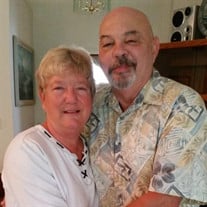 William James Dulin, known to all of his friends and family as "Jimmy", left this earth to be with his Lord and Savior, Jesus, on July 6, 2020. His loving wife, Bonnie, was by his side. Jimmy was born in Dover, Delaware, in 1950 and grew up in Camden, where he attended Caesar Rodney School. His father, James Graham Dulin, died when Jimmy was just three years old and his mother, Louise Dulin, raised him and his two younger brothers while operating a hair salon in their home. He spent eight years in the Army, including a tour in Vietnam in 1968-69. Later, he was an assistant pastor for twenty four years in Kansas City, where he spent his time doing community work and helping parishioners of his Lutheran church. He considered everyone he knew a brother or sister and was generous with his heart to assist everyone he knew who was in need. Jimmy connected with his son, Anthony Dulin, just a decade ago and it was one of the happiest moments of his life. The instant love they had for each other was truly a blessing from God. Bonnie and Jimmy had six years of a loving, joyful relationship in St. Augustine, Florida, where they lived. Of that six years, they experienced wedded bliss for the past two years. The last ten years of his life, he suffered severe chronic illness that made simple movements extremely painful and debilitating. When the Lord called him home, his spirit soared to the Lord's loving embrace, where he became free of pain and now rests in peace. In addition to his mother and father, Jimmy was preceded in death by his younger brother, Herb Dulin (Herbie); and his older half-brother, Ronnie Dulin, who helped raise them after their father was killed in an auto accident. In addition to his wife, Bonnie, and son, Anthony, he is survived by his brother, Ed Dulin (Ann); sister-in-law, Barbara Dulin; nieces, Nicole and Keeley; nephews, Eddie Jr. and David. Memorial Services will be held August 17, 2020 at 3 p.m. Memories and tributes can be recorded at Craig Funeral Home (www.craigfuneralhome.com).

William James Dulin, known to all of his friends and family as "Jimmy", left this earth to be with his Lord and Savior, Jesus, on July 6, 2020. His loving wife, Bonnie, was by his side. Jimmy was born in Dover, Delaware, in 1950 and grew up... View Obituary & Service Information

The family of William James Dulin created this Life Tributes page to make it easy to share your memories.

William James Dulin, known to all of his friends and family as...

Send flowers to the Dulin family.